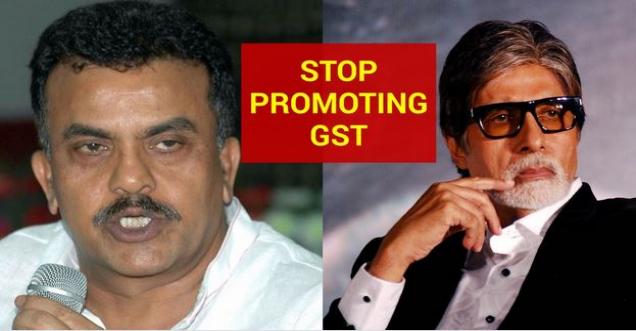 New Delhi, June 21: GST is just a few days to launch, However Congress has pulled Bollywood superstar Amitabh Bachchan into a controversy related to this tax act. Sanjay Nirupam, the  Mumbai Congress chief has slammed Bachchan for promoting GST.

Would advise @SrBachchan to wthdraw frm brand ambassador of #GST in ths form.An expected backlash frm traders may go against him eventually.

Congress leader Sanjay Nirupam slams the actor for promoting the tax regime and said that he should not be a part of Bhartiya Janata Party's "stupidity".

"Amitabh Bachchan is a higly respectful person, but it is not important that he also become a part of every stupid act of BJP. The protests against GST impact his image," said Congress Sanjay Nirupam.

Here are the series of posts on Twitter, Amitabh said, "they asked me I did it".

a campaign to explain and introduce GST .. they asked me i did it .. https://t.co/ZHXlTVDdyP

A 40-second video of Bachchan has also been released by the central government, in which the actor explains GST as a "unifying force, akin to the three colours in the national flag". "GST - An initiative to create a unified national market," the Finance Ministry said on Monday in a tweet, attaching the video.