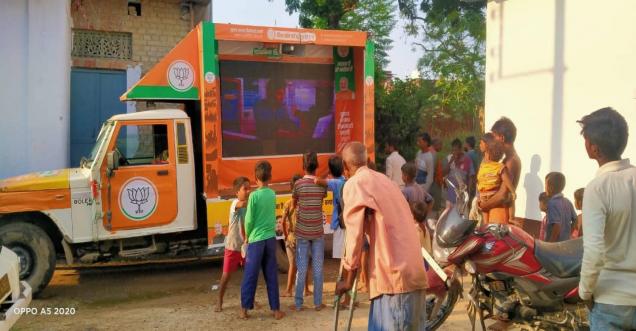 If 60% of upper caste candidates

Hindutva versus secularism: The BJP's Hindutva agenda has forced the Congress and the RJD to churn amid secular politics. This is the reason in the RJD has given fewer seats to Muslims, they have got fewer tickets than in earlier elections. It is a matter of fact that further elections are to be held in the assembly constituency with Muslim majority voters. Similarly, in the first phase, Congress has fielded only one Muslim candidate.

Dominated in this election after 1990

After 1989-90, upper-caste politics was the victim of fierce opposition. In 1990, Dr. Jagannath Mishra lost the election and Lalu Prasad was in power. Politics took such a turn that Janata Dal leaders started cursing the upper castes (Bhu - Bhumihar, Ra-Rajput, Ba-Brahmin-L-Kayastha i.e. Bhurawal) from an open platform. OBC, Dalit, and BC Golbandi strengthened the Lalu-Nitish pair. In 1992, the Brahmins left Congress and became BJP. At the same time, Ram Vilas Paswan fostered Dalit politics, Lalu and Nitish Kumar were divided on OBC politics. The Samata Party was formed in 1994. Nitish's Samata Party also promoted anti-upper caste politics.

By 1995, efforts to strengthen upper caste politics intensified. Rajput and Bhumihar leaders started coming forward. With the formation of JDU in 2003, Nitish Kumar changed his old stance and succeeded in bringing Bhumihars, a section of the upper caste. Now in 2020, all parties started worrying about the upper caste voters of Bihar. Although the suspicion of murder in Sushant Singh Rajput's death arose, among the upper castes getting tickets, all parties have given importance to Rajput candidates.