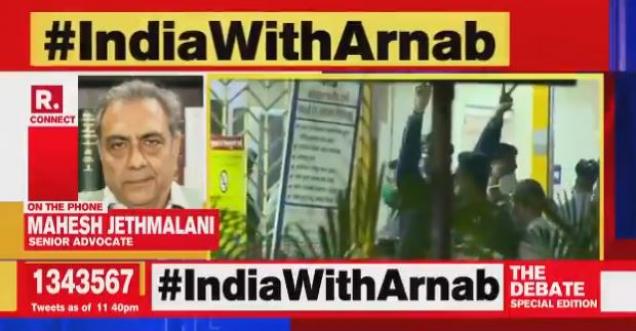 The Alibag court on Wednesday rejected the plea of the Raigad police which had sought police custody of Republic Media Network's Editor-in-Chief Arnab Goswami following his shocking and brazen assault and arrest early in the morning. The Chief Judicial Magistrate remanded Arnab to 14 days of judicial custody. Arnab has been asked to keep his bail papers ready.

Critically, while pronouncing the judgment, the CJM observed that there is no chain showing nexus between the suicide and the role of the accused i.e. Arnab, in the case that had been closed in 2018 and then reopened now, with Arnab's arrest on Wednesday coming completely out of the blue amid the ongoing Mumbai police witch-hunt against Republic Media Network. Furthermore, the judge also noted that the case was reopened without any prior consent from the court.

Meanwhile, the Bombay High Court will hear Arnab's petition against his illegal and unlawful arrest at 3 PM on Thursday. Petitions have also been filed with the National Human Rights Commission (NHRC) and Maharashtra Human Rights Commission (MHRC) against the shocking physical assault and subsequent on Arnab by the Maharashtra Police on Wednesday. The plea before the MHRC has been called with an urgent consideration of the matter on Thursday. A Supreme Court lawyer has also written to the Chief Justice of India, whereas BJP MLA Ram Kadam is to meet the Maharashtra Governor at 10:30 AM on Thursday.

#LIVE on #IndiaWithArnab | I am glad that the rule of law is upheld today, hopefully, we will get Arnab out at the earliest: Abad Ponda, Arnab Goswami's lawyer

"I believe the entire investigation in the case is illegal as there was a judicial order passed, that was not challenged. The police have no right when the case is buried and dead to revoke it on its own, they have to go to the court. It was a monstrous abuse by the police to pick him up," said advocate Abad Ponda who represented Arnab in court.

#IndiaWithArnab | Arnab Goswami’s arrest has been made part of a larger vindictive exercise against an independent journalist & news network. This is to bring to light real facts on unfounded allegations in a closed case based on which #ArnabGoswami was assaulted & arrested pic.twitter.com/Artf59dBhO

#LIVE on #IndiaWithArnab | They haven't got permission to re-open the case. This whole thing is malafide. This case completely puts the police in a very poor light: Mahesh Jethmalani, Senior Advocate

Watch here and share your views using the hashtag - pic.twitter.com/F7u1JyxRYN

In a shocking assault on Wednesday morning, Republic Media Network's Editor-in-Chief Arnab Goswami was arrested by the police. Arnab was dragged out of his own home as nearly 40-50 police officers cordoned off his residence. Moreover, the cops also attacked his 20-year-old son and manhandled him as he tried to capture the brazen attack by the Mumbai Police on camera.

After the arrest, Maharashtra Police took him to Raigad Police Station and stated that he has been arrested under charges of abetment of suicide in the 2018 Anvay Naik case - which was closed but has now been reopened. Apart from harassing Arnab at his own residence, the cops also blocked Republic Executive editor Niranjan Narayanswamy and senior associate editor, Sanjay Pathak, from entering Arnab's residence. When Niranjan said that it is his right to report, he was thrown out of the building and the Mumbai Police attempted to take away his phone.

Prior to being produced before the court, Arnab highlighted the injuries on his arms on camera as he stated that he was assaulted by 7 police officers. "I've shown it to the doctors. It was Pradeep Patil, Sachin Vaze and 7 other policemen. They surrounded me, held me by the scruff of my neck, pushed me," Arnab said just before entering the court.