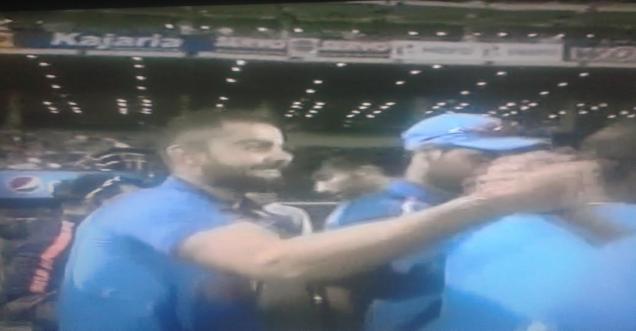 India Vs England, First Match result: India won their first match against England in Pune by 3 wickets. Excellent batting by Indian skipper Virat Kohli and Kedar Jadhav led India to win this match. Ashwin hits 6 to win the match with 11 balls to spare.

Indian captain Kohli has  hits his 27th hundred in ODIs in a chase of 356 against England in first match of series. #INDvsENG

The score looked bad from Indian point of view. Indian team got a slow start, and they lost 4 wickets in quick successions.  All the stars including Dhavan , Rahul, Yuvi and Mahi could;nt stay on the Creech for longer time. Jadhav and Captain Kohli played good innings and once India was 63-4 in 11 overs and after 33 overs they are 271-5 only.

Kohli was out on 122 (105 balls, 8x4, 5x6) when the score of India was 263-5 in the 36th over. Kedar Jadhav is still playing brilliantly along with Hardik Pandya. Kedar has already scored century and is looking to take India towards victory. Kedar also lost his wicket at the score of 120 (76 balls). India needs 61 runs from 60 balls. India wins this match by 3 wickets.

The Men in Blue are yet again proving why they are the number one rank and especially under Kohli the things are truly turning into gold. In the limited over’s format, though, the hosts are not the clear cut favourites neither is England the favorite of the series. It’s just the contest is an even one – something one wouldn’t have expected some years ago.

The focus today was MS Dhoni-Virat Kohli, however yet again Kohli is proving how a single man can always turn the match in ones favor. Now that Dhoni has given up on the captaincy reign, while maintaining that the split captaincy doesn’t work in India.

After 2007, it is first time that Dhoni is playing in Indian team as a player (Not Captain). The match is being played in Pune. Kohili won the toss and decided to field first. England got good start and were able to post a massive score of 350 runs. It was combined show from the English team. Everyone including Jason, Joe, and Ben scored above 50 runs.