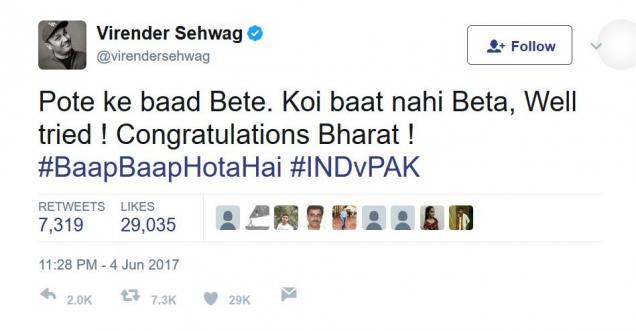 New Delhi: After India's victory in the Champions Trophy, former Pakistani cricketer Rashid Latif got angry on Virender Sehwag's tweet. He made objectionable and indecent comments on Virendra Sehwag. Earlier Sehwag tweeted after winning over Pakistan. He named Pakistan as son of India and Bangladesh as grandchild of India. He had written on twitter , 'After grandson  the Sons. No matter what, good try! Congratulations India! #BaapBaapHotaHai #INDvPAK

Rashid Latif attacked Sehwag after India lost to Sri Lanka. He made severely indecent comments on Indian cricketer In this 15-minute video, Latif said that Sehwag has got a disease, if he wants, he can come to Pakistan to treat it.

A meaningful silence is always better than meaningless words.

Along with that, He said that the behavior of players like Sachin Tendulkar, VVS Laxman was good but Sehwag’s behavior is not good. Latif said that India would be out of the Champions Trophy after losing to South Africa.

In response, Sehwag tweeted the words of a former Pakistani cricketer by tweeting. He wrote, "It is better to be silent than to reply to unmeaningful thoughts."