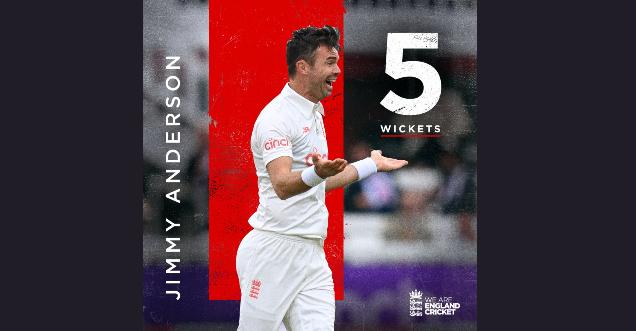 London: On the second day of the England-India Test at the iconic Lord’s ground on Friday (August 13), veteran paceman James Anderson achieved another feat in his illustrious international career.

The 39-year-old Anderson took another five-wicket haul as India was bowled out for 364 in the post-lunch session. India had resumed the day at 276/3.

The oldest paceman to take a five-wicket haul in Test cricket is South African Geoff Chubb. At 40 years and 86 days, he had achieved the feat against England in Manchester in 1951.

The right-arm paceman had dismissed Rohit Sharma and Cheteshwar Pujara on the opening day. On Friday, he added the scalps of Ajinkya Rahane, Ishant Sharma and Jasprit Bumrah.

Anderson, who made his Test debut against Zimbabwe in 2003, is playing in his 164th Test. So far, he has taken 626 wickets. In the first Test against India which ended in a draw in Nottingham, he took four wickets.

He is the third highest wicket-taker in Test cricket after Muttaiah Muralitharan (800 wickets) and Shane Warne (708).