A post is going viral on social media, in which two people can be seen wearing garlands. Sharing the post, users are claiming that a father fell in love with his own real daughter and married the daughter. 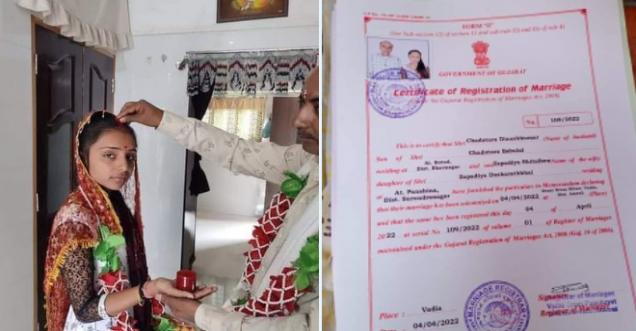 News Claim: A post is going viral on social media, in which two people can be seen wearing garlands. Sharing the post, users are claiming that a father fell in love with his own real daughter and married the daughter.Sharing the viral post, a Facebook user wrote, 'Love marriage with his own daughter Fell in love with his real daughter and got married, there was love between the two for 4 years. Shame on the devil too he has done such a thing, what era is this going on?

News Verification: On our investigation, we did a google reverse image search which led us to a report of Gujarat Media dated 08 April 2022.The headline of the news is, 'This girl from Botad is married to a young man of her father's age'. According to the information given in the news, 'Dineshbhai, a resident of Botad district, did love marriage with a girl named Sheetal. Dinesh Bhai hails from Botad district and Sheetal is a resident of Surendranagar. When they saw each other, they fell in love with eachother? Sheetal's parents are also worried that their daughter's husband is the same age as her father. The parents explained a lot to their daughter, but in the end, they did not listen to her.”

News Verdict ayupp.com: We checked this post and found that this claim is fake. This marriage took place in Botad, Gujarat, but the relationship between the two is not that of father and daughter. The person getting married is of the age of the father of the girl but not the father.