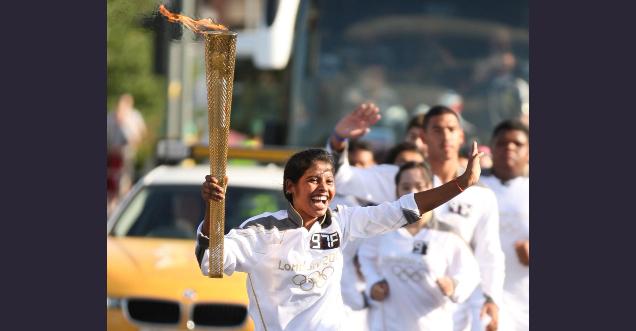 New Delhi: On Monday (August 9), there was a story on a sports website claiming that India’s flagbearer at the 2012 London Olympics is now working as a daily wage labourer. What is the truth behind this? We will tell you.

However, the news is fake. Pinky is not an Indian athlete and did not carry the national flag at the London Olympics in 2012. She was one of the torchbearers at the Games. Many shared the story on Twitter without knowing the facts. At the London Olympics, wrestler Sushil Kumar was India's flagbearer.

Olympic torch relay gives an opportunity to ordinary citizens to carry the flame. It is part of the Olympic tradition.

"Thank You Hero: Pinky Karmakar - The Girl Made Us Proud At London Olympics. Meet Pinky Karmakar. This young girl from the Tea community of Assam made her community and country proud when she traveled to the Olympic Torch Relay in June 2012. The London 2012 Olympics of the Legacy Program. The daughter of a tea-plucker...," UNICEF India had written on Facebook in 2012 with an image of Pinky carrying the Olympic torch.

Thank Your Hero: Pinky Karmakar– The Girl that Made Us Proud at London Olympics https://t.co/cXPdVv0m

ANI news agency quoted Pinky as saying, “I didn’t get any facilities. I don’t understand why. I was selected by UNICEF. My dreams have been shattered.” ANI had said in a tweet, “Assam | Pinky Karmakar, who represented India as a torchbearer in the 2012 London Olympics, now works as a daily wager at a tea garden in Dibrugarh.”

Inaccurate representation of facts. The below tweet stands deleted. pic.twitter.com/tz3tTzpsjA

Who is a flagbearer at the Olympics?

“The flagbearer for a national delegation is, in some ways, akin to team captain, but it is also much more than that. By carrying their national flag during the Parade of Nations, the flagbearer becomes an enduring symbol of their national values and indeed of Olympic ideals, not to mention an inspiration for future generations. Each delegation decides its own means of designating the flag-bearer’s role,” this is according to the official website of the Olympics.

people seemed to have confused torchbearer as flagbearer. Torchbearers don't have to be sportspersons and many people hold the torch around the world as it passes via many regions. She was selected by UNICEF for the final round of relay in UK it seems.

The #PinkyKarmakar story just didn't make sense. @ANI, like other media carried this story.When I asked some basic questions (see screenshots), their head wrote back to say the story was indeed odd & they were deleting it.
That's decent journalism. How many others will follow? https://t.co/nrqIqXUMyY pic.twitter.com/03ymoy3172