A new claim is being made on social media regarding PM Narendra Modi's constituency Varanasi. Shared the video of the demolition of the ancient temple. 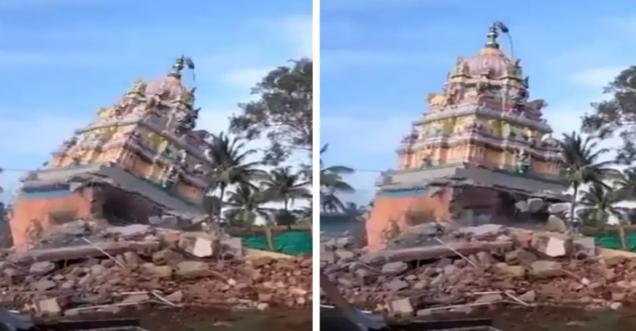 News Claim: The message is going viral on social media  over the demolition of a 300-year-old temple in Rajasthan's Alwar district is still going on. The opposition party is continuously accusing the Congress government regarding this. Meanwhile, such messages have come to the fore, which are about the destruction of temples on social media. Considering these rumors to be true, people are also sharing it fast.

News Verification: On social media, a person shared a video of an ancient temple being demolished. It was written in it that according to the news, about 200 temples / Shivling had to be demolished to build Vishwanath Corridor. There was a Bharat Mata temple, which was about 5 thousand years old.People are believing this video to be true and are engaged in making it viral rapidly. Along with this, demanded the administration to stop the action of demolishing the temples.

I condemn the demolition of an ancient Hindu temple by @BJP4Karnataka govt in Nanjanagudu, Mysuru.

The demolition is done without the consultation of the people in the region & has hurt the religious sentiments.

At the same time, when this video was investigated, it turned out to be completely fake. The video going viral was not from Varanasi but from Karnataka. The claim of demolition of Bharat Mata temple is false, it is still in Varanasi. When the video was investigated, it was found that this video is from September 2021. At that time the Mahadevamma temple in Nanjangud taluk of Mysore district of Karnataka was demolished. After this there was a lot of ruckus and former Karnataka CM Siddaramaiah also surrounded the government.

News Verdict ayupp.com: Ayupp found that the claim made with the viral video is false. This video is a year old and is from Mysore in Karnataka.