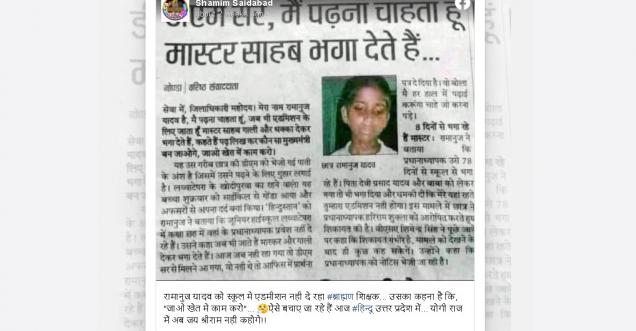 News Claim: Recently A picture of a newspaper clipping is going viral on social media. In which a student has appealed to the DM that the headmaster of the school is not giving him admission. The headline of the news is - "I want to study in DM sir, but the master does not let me in."

News Verification: Social media users are claiming that this condition is happening in Uttar Pradesh during the rule of Yogi government. According to the newspaper, Ramanuj Yadav, a student of Gonda city of UP, wanted to take admission in the sixth grade in the junior high school in his area. But the headmaster (Hariram Shukla) misbehaved with the student and drove him away.

The headmaster asked Ramanuja, "Will education make you the chief minister? Go and work in the fields." After this Ramanuja wrote a letter to the DM, requesting for help.

We started the investigation by finding the screenshot of the viral article on Google reverse image. On searching with the help of some keywords, we found a website named sabrangindia. In which the viral news was published on 20 September 2016.

In this news also that information has been given which is written in the post of viral news. The report further states that the headmaster of Khodipurwa, Hariram Shukla, is involved in implementing the varna system, in which a uniform attitude is adopted towards all OBC and SC students in the village.

Apart from this, many people also posted this clipping on their Facebook in 2016. A Facebook user named Shubhshek Singh Yadav shared the cutting of this newspaper in 2016.

A thorough reading of the viral cutting reveals that this news was published in the "Hindustan" newspaper. The news is many years old and is from the time of Samajwadi Party in power.

It is clear from the investigation that this news is not of now but of 2016. At that time there was a Samajwadi Party government in UP and the CM was Akhilesh Yadav. Yogi Adityanath became the Chief Minister of UP in March 2017.