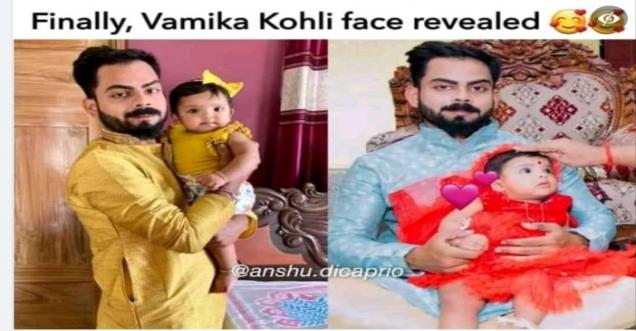 News Claim:  A collage of two pictures is going viral on different platforms of social media. In this, a man can be seen carrying a child in his lap. Social media users are making this collage viral by saying that the man in the picture is Virat Kohli and his daughter Vamika Kohli is in his lap. Users claim that Virat Kohli showed his daughter's face to the world.

Viral on Social Media:  Facebook user Arv Rawat uploaded a collage of two pictures on his account on 2 December. Above it was written: Finally, Vamika Kohli face was revealed.

News Verification: The truth came out. Actually, neither Virat nor his daughter Vamika is in the viral picture. This picture is of Susobhan Lahiri living in Ranaghat, West Bengal. Susobhan's face is like Virat Kohli. In his arms is his elder sister's daughter. The viral post turned out to be fake.

On searching the viral picture, we found a picture of a collage on a Mims website. In this, we got a mention of Susobhan Lahiri's account. Based on this, we started scouting the Facebook account named Susobhan Lahiri.

Scanning the account of Susobhan, we came to know that he is a resident of Ranaghat. They run a centre there by the name of MEDICANA ADVANCE DIAGNOSTIC & POLYCLINIC.