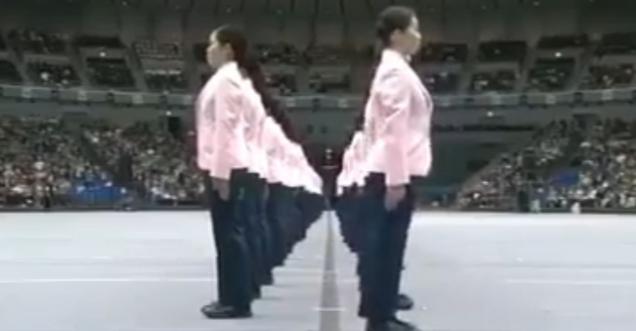 News Claim: A video shared by thousands on social media claiming to be from the recent Tokyo Olympics 2020, shows around 77 women doing synchronized walking

Viral message on WhatsApp today & other Social Media claims: A video viral on social media claiming to be from the ending ceremony of the Tokyo Olympics, 2021.

Wonderful closing ceremony at the Olympics, like each person, was digitally programmed...

Wonderful closings ceremony at the Olympics, like each person was digitally programmed! pic.twitter.com/qzjWl7EPzo

Wonderful closing ceremony at the Olympics, like each person, was digitally programmed...Too good...TulipHerbButterflyRevolving heartsRoseLeaf fluttering in windMaple leafTulipHibiscusBlossomCherry blossom And with it, we say 'Thank You Tokyo' and will see you all in the 2024 Paris Games. Sayonara!

Another youtube video uploaded in 2013 states, You've heard of synchronised swimming; now in Japan, there's synchronised precision walking. It's called Shudankodo in Japanese, or Collective Action, and has gained massive popularity after a YouTube video went viral last year. A group of 77 students, from Nippon Sports Science University in Japan, have spent the last 5 months practising to perfect their walk, with very impressive results The university is famed for producing many Olympic gold medalists, sumo wrestlers and politicians. Report by Andrea Lilly.

Some 11,000 people gathered at the university yesterday to witness “Shudankodo “ (collective action) which has gained massive popularity after a YouTube video went viral last year. But Nippon Sports Science University says the activity is nothing new, and that they’ve been doing it since 1966.

It took the 77 students five months - at three days per week - of exercise to get them in shape for the performances. The practise drills saw them walking up to 1,200km.

News verdict: False, the video is available since 2013, so it is not from the recent closing ceremony of the Tokyo Olympics