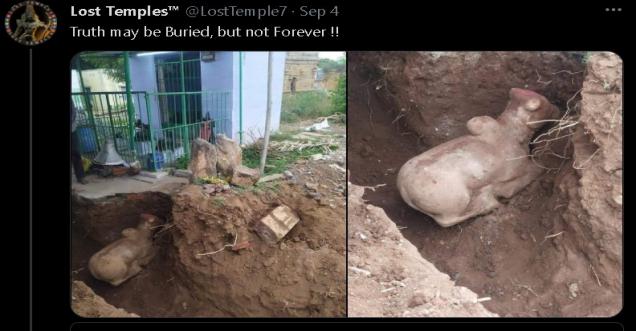 News Claim: Recently An idol of the Hindu deity Nandi is going viral on social media, which looks like it has come out in some excavation. The post is going viral with the claim that it has been dug out from under a mosque.

Viral on Social Media:  The viral picture, "Wherever place you dig and see, the symbol of Sanatan will be present under every Mazar, dargah and mosque. No matter what happens, India is a gift of the minority to the majority in the country, yet look at the tolerance of the majority……”

News Verification: We used the Google reverse image search tool to trace the original source of this image. We found this picture in a September tweet by a Twitter handle named Lost Temples ™. According to the information given in the tweet, "Large Nandi idol found in the excavation of land to expand the wall of Selandiyamman temple complex in Namakkal district Mohanur Ariyur Arulmigu in Tamil Nadu".

Truth may be Buried, but not Forever !! pic.twitter.com/moK4YejqOC

On searching with keywords, we found the news in this matter on the website of www.vikatan.com . According to the news, “An ancient Nandi idol was found during excavation inside the Selandiyamman temple at Ariyur near Mohanur. This has stirred the devotees. The devotee says, 'This Nandi idol is very old.

On searching with keywords, we found a video in this regard on the verified YouTube channel of PuthiyathalaimuraiTV. The Nandi idol and the place with the viral picture can be clearly seen in this video. According to the information given in the video, this Nandi statue was also found during an excavation in the Selandiyamman temple of Tamil Nadu.

News Verdict ayupp.com: The viral claim is false. The idol was excavated during an excavation in a temple in Tamil Nadu.