After seeing 2 Muslim girl with Hindu boys, what villager do, everyone see 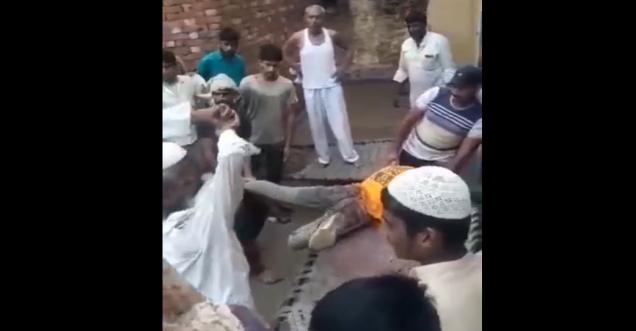 News Claim: A video viral on social media. In the video, some men can be seen brutally thrashing two boys. Some people can be seen helping the young man by holding hands while lying on the cot. The same woman can also be seen beating up the youth with a stick in her hand. This video is being shared giving Hindu-Muslim angle, users are claiming that these two Hindu boys have been caught along with two Muslim girls and after that, they have been beaten up like this.

Viral message on WhatsApp today & other Social Media: The message being shared on social media as,

News Verification: To begin our investigation, we first put the video in the InVid tool and extracted some of its keyframes and searched them using Google reverse image. In the search, we found news related to this video on Dainik Jagran's website. In the news, we saw the same frame of the viral video. According to the information given in the same news, 'Two videos of a woman and two youths beating together with sticks have gone viral on the Internet media in village Titarwada of Kairana area. The police registered a case as soon as the matter came to its notice. Inspector Premvir Singh Rana, in charge of Kotwali, says that this video has come from Titarwada village. In the police investigation in the case of beating and video viral. The matter seems to be a love affair. The youths who were beaten up were residents of Muzaffarnagar district. The police have registered a case in the matter and started the search for the accused who beat them up. Superintendent of Police Sukirti Madhav says that those who beat up the woman are her maternal relatives.

A video of the Shamli Superintendent of Police was also found above. In the video, he can be heard saying, "A video that is going viral on social media has come to our notice. After examining that video, it was reported that a person named Ehsan Ali was married in a village in Shamli and the same person with whom he was married is seen in the video. And their love affair was before their marriage, in that order, a person came to his in-laws' house and he came with his friend. When her in-laws came to know about this, those persons were stopped by them and the girl's maternal uncle was told. The people of the maternal and in-laws together beat up these boys. No complaint was made to the police in this regard. The video which has gone viral has come to the notice of the police today and after an immediate investigation, a case has been registered by the police.

News verdict: We found that the claim is made with the viral video is false. The boys who are being beaten up in the video and the people who kill them belong to the same fraternity, there is no communal angle to the matter.