A picture is viral on social media where currency notes littered all around with the claim that Italians are throwing away their money on the streets as it is useless to them now. 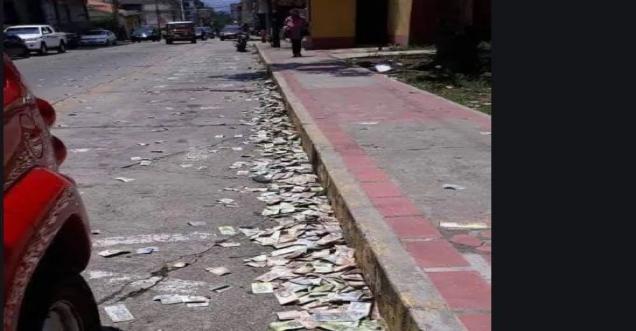 Multiple Fake news claims:
A picture is viral on social media where currency notes littered all around with the claim that Italians are throwing away their money on the streets as it is useless to them now.

News Verification: An image is shared on Facebook, Twitter and other social media platform showing notes scattered on the road. It is being claimed that this scene is from Italy. It is being said that in Italy people are throwing wealth on the streets by saying that they are worthless.

This claim turned out to be wrong in our investigation. These are pictures of Venezuela, not of Italy.We did a Facebook post (archive link) dated March 22, 2019 after doing reverse image search on the picture of the notes lying on the road. This post has been shared more than 3.83 lakh times.  According to a report dated March 12, 2019, published on the Venezuelan news website Meduradas, a day before (March 11, 2019) some masked people committed robbery at the Bicenteniero bank agency. The news was confirmed by National Assembly Deputy Williams Davila and journalist Leonardo Leon.
After the robbery, people threw the old currency on the road and set it on fire. So that it can tell that the looted currency is meaningless. It was also described in the media as a way of protest. The Bolivarian National Guard, the State Police of Merida and the National Police Agency of Venezuela also reached the spot after the incident.

According to Ayupp investigation we found that this viral news is fake and misleading.