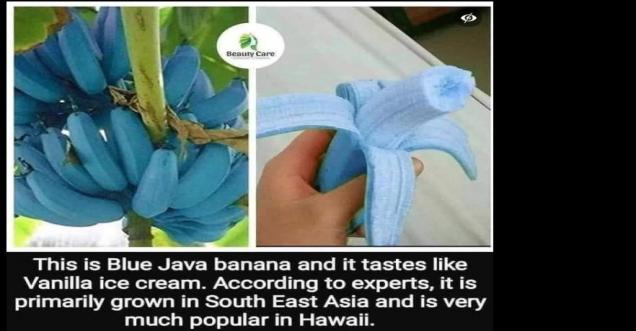 News Claim: An image viral on social media and widely liked by many shows a blue banana.

This is Blue Java Banana and it tastes like Vanilla ice cream. According to experts, it is primarily grown in south-east Asia and is very much popular in Hawaii.

How come nobody ever told me to plant Blue Java Bananas? Incredible they taste just like ice cream pic.twitter.com/Aa3zavIU8i

News Verification: The above viral news is widely talked about on social media and liked over by thousands on the internet. However, as the name suggests the bananas are not actually blue.

Does the blue banana taste like Vanilla ice cream?

As per amazopedia, as can be seen in the image the blue java banana exists, however, the colour is not blue. It is like any other banana. It is yellow in colour.

Blue Java Banana is also known by many other names. In Fiji, they are known as “Hawaiian Banana”, in Hawaii as “Ice Cream Banana”, in the Philippines as “Krie” and in Central America as “Cenizo”.

As per Wikipedia, The Blue Java (also known as blue bananas, Ice Cream banana, Hawaiian banana, Ney Mannan, Krie, or Cenizo) is a hardy, cold-tolerant banana cultivar known for its sweet aromatic fruit, which is said to have an ice cream-like consistency and flavour reminiscent of vanilla.

News verdict: True, but the colour is not blue