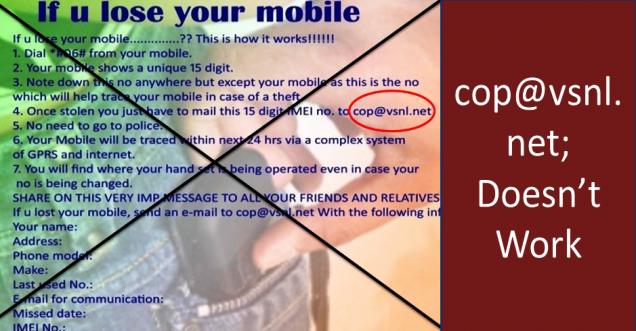 Can we get a lost mobile by messaging to cop@vsnl.net

claim, if mobile is lost , send it to cop@vsnl.net , call will be tracked in 24 hours, truth revealed in investigation

Fake news claim: A message is going viral on social media. It has been given an email id cop@vsnl.net and it has been claimed that if the phone is lost, send the phone details to this email id. You will not have to go to the police. In the next twenty-four hours after email, the phone will be tracked through GPRS and you will get it. A reader sent us this viral post to check the veracity. The viral claims turned out to be false in the investigation.

Before you lose your phone :

If u lose your mobile in India, you can get it back.
Got an interesting fact to share..
Nowadays each one of us carries very high end or latest Mobile devices which always
Fears that it may be stolen.

Each mobile carries a unique IMEI no. i.e. International Mobile Equipment Identity No which can be used to track your mobile anywhere in the world.

This is how it works!!
1. Dial *#06# from your mobile.
2. Your mobile shows a unique 15 digit.
3. Note down this no anywhere But except in your mobile as this is the Number which will help trace your mobile in Case of a theft.

PASS ON THIS VERY IMPORTANT MESSAGE TO ALL YOUR FRIENDS AND RELATIVES.

News Verification: The above post is viral since 2015 and is widely shared on social media. If you go to the website http://www.copvsnl.net.in/, you will find a lot of information and knowing that Cop@vsnl.net, do not exists any more.

Cop@vsnl.net was an id of Chennai police which ceases to exist, it was first published in The Hindu website post then some users randomly started posting articles about the above that the Chennai Police id DOES help when phone is lost. Now it is flooded with many such posts that suggest that you can find your lost mobile phone if you send mail along with some details to this id.

Conclusion: cop@vsnl.net was the email ID of Chennai Police. Which were only for the citizens of Tamil Nadu. It is now completely closed after being hacked.

Lost your mobile?, Heard or read of cop@vsnl.net on multiple website suggested in google first itself, then this is website made for you, to tell that cop@vsnl.net is not working now, so don?t waste & energy in send mails there; This website also enlighten other possible ways to track lost phone through IMEI tracking; Cop@vsnl.net was an id of Chennai police which ceases to exist, it was first published in The Hindu website post then some users randomly started posting articles about the above that the Chennai Police id DOES help when phone is lost.