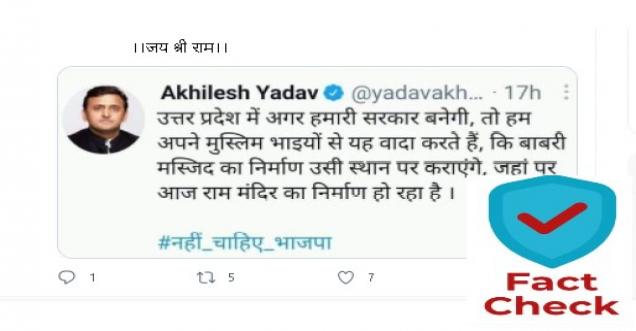 News Claim: A news viral on social media which states UP Ex-CM Akhilesh Yadav as saying, “if the Samajwadi Party government is formed even by mistake, then Shri Ram Mandir will not be built.”

Its People of Uttar Pradesh, have you seen this statement of your Shri Akhilesh Yadav? If not, then open your eyes and see. Like everyone thought earlier, if the Samajwadi Party government is formed even by mistake, then Shri Ram Mandir will not be built. Now you people decide whose government has to be formed in 2022.

The above statements/images are viral on social media,

News Verification: The above viral news is widely talked about on social media and liked over by thousands on the internet. However, the information shared is not true. Akhilesh Yadav or the Samajwadi party has not made any such statements.

If Akhilesh Yadav had ever made such statements, it would have been part of the National media debate or the news would definitely have come on National Media. We did not find any such news or report.

As per livehindustan, Samajwadi Party National President Akhilesh Yadav has said that after the construction of the Ram temple, he will come to see Ram Lalla along with his wife and children. The former CM of UP said in Ayodhya that he believes in all the incarnations of Lord Vishnu. During this, he said that when Lord Rama came to Ayodhya, Parijaat flowers were showered on him, that is why Parijaat trees were first planted in Ayodhya during his government.