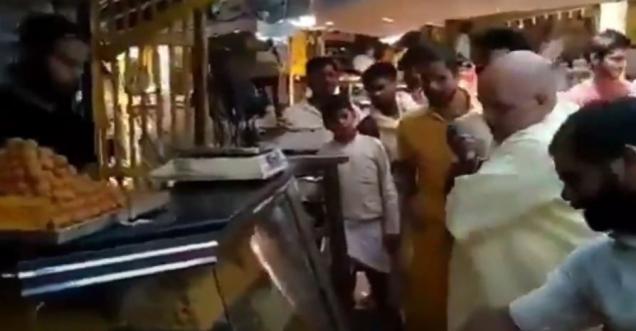 News Claim: A video has been shared on social media alleging that the BJP looted the shops of those who did not donate for the construction of the Ram Temple in Ayodhya.

For the construction of Ram temple

For the one who doesn't have the guts to donate....

News Verification: A video of him taking only the laddus and the desserts and throwing them in the street is shared in the post above. It says, "BJP looting shop for refusing to donate to build Ram temple." This video was posted on July 3, 2021 by a Facebook ID of Tirupur Murasoli Palaniappan. The information did not say where the incident took place.

As per the below youtube video, Ayodhya: Priest inspects shops, throws laddu made for Prasad on the roads | UP

The incident took place on June 30, 2021, at the Hanuman Garhi Anjaneyar Temple in Ayodhya. In it, it is the custom of the devotees to offer Laddu as a request to the Anjaneyar temple. There are a number of shops selling laddu in the area within the temple. The quality of the laddu given to the Anjaneyars to create was not perfect, they were stale. Anjaneyar temple sadhus have told shopkeepers not to sell laddu as it looks like it is spoiled. At that time, the laddus were taken from the shops and dumped on the roads.

Laddu traders condemned this act of the Sadhus. It was reported that the particular Anjaneyar temple was closed for an hour and a half due to the incident and a protest was held in Ayodhya condemning the action of the Sadhus.

As per latestly, Mahant Gaddi Nasheen Premdas was granted permission to offer 'prasad' at the Hanuman Garhi temple on Wednesday, however, since the quality of Ladoos, which were offered as 'prasad' at the shrine, was not good, the priest refused to accept the offering. This angered the sadhus who started to throw the Ladoos on the roads and protest against the shop owners.

News verdict: Therefore, it is not the BJP workers who looted shops that did not donate to build the Ayodhya Ram Temple.