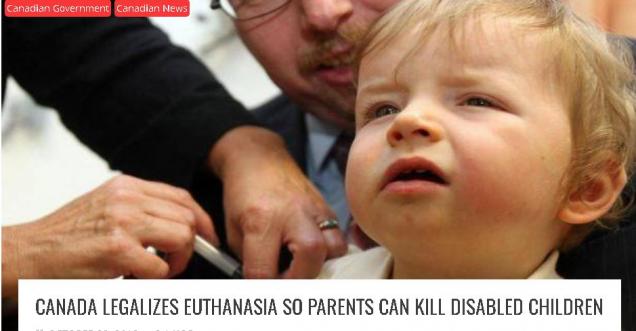 Doctors now able to euthanize disabled, sick or dying children under new laws
Canada has just introduced a new law that legalizes euthanasia for parents who want their doctors to kill their sick, disabled or dying children. Euthanasia in Canada has been legal now for just over a year, but pediatricians have reported an “increasing demand” for euthanizing children and infants, something that wasn’t previously allowed. Canadian law allowed for the “assisted medical suicide” for terminally ill or suffering adults who could legally “volunteer” to end their own life.This law wasn’t extended to children as it’s felt that a minor wouldn’t be able to consent to their own death. Now, the new legislation will pass the responsibility of consensual death over to the parents, allowing them to decide whether to euthanize their child.The change was prompted by a survey by the Canadian Paediatric Society (CPS) that showed an “overwhelming demand” from parents for euthanizing children. Wesley Smith, an American anti-euthanasia activist, said the shift in legislation proves the morally slippery slope that a nation slides down when it decides that “killing is an acceptable answer to human suffering.”Writing in the National Review, he said: “Once euthanasia consciousness is unleashed, it never stops expanding,”

Facts Check Analysis: This is not true and especially from a website that has already said by many a source of providing fake news. As per thestar, Native Born Canadian Movement (NBCM) is a self-styled malicious online article provider.

Euthanasia in Canada in its legal voluntary form is called medical assistance in dying and became legal along with assisted suicide as of June 2016 to end the suffering of terminally ill adults.

Bill C-14, passed by the Parliament of Canada in June 2016, amended the Canadian Criminal Code so as to legalize both physician-administered euthanasia (PAE) and physician-assisted suicide (PAS), and to govern access to both procedures in Canada. Neither euthanasia nor assisted suicide are available to minors, nor on the grounds of mental illness, long-term disability, or any curable condition. To prevent suicide tourism, it is available only to residents eligible for Canadian healthcare coverage. Advance directives are not allowed in Canada for voluntary euthanasia and patients cannot arrange to consent "in advance" to dying later at the hands of a caregiver (such as in cases of dementia or Alzheimer's disease where patients may want to die after they reach an advanced state of mental decline).

Eligibility for medical assistance in dying