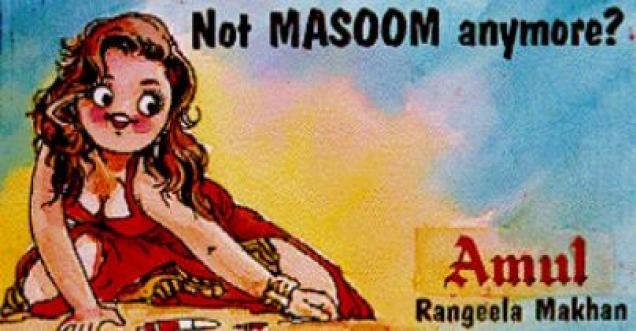 News Claim: An advertisement is circulating on social media featuring Bollywood actress Urmila Matondkar, claiming that the cartoon is shared by Amul making fun of her. The caption of the cartoon reads: “Not MASOOM anymore”, referring to Matondkar.

Many users retweeted the claim

Amul needs to be CANCELLED ASAP for joining the IT Cell in 1995. pic.twitter.com/u7YSLrdGab

Deleted the Amul ad because it seems the ad is an old one (from when Rangeela was released). Doesn’t really make the ad any better or more humorous but it is definitely not a response to the current ‘conversation’ around Urmila Matondkar.

Anurag Kashyap, replying to the journalist, stated “If I am not mistaken, this came out when “Rangeela” released and not now… It was meant to be an appreciation. Now misused by trolls after the current scenario.”

If I am Not mistaken , this came out when “Rangeela” released and not now. And it was based on the fact that Urmila was the child actor in “Masoom”. It was meant to be an appreciation . Now misused by trolls after the current scenario.

This was a Famous Hoarding of Amul in 1995 when Rangeela released. Like in 1994, it was on Raveena with - Tu Cheez badi hai Maska Mast, 1993, it was on Madhuri with - Roti Ke Neeche Kya Hai?. This has nothing to do with any Current Controversy. pic.twitter.com/AYRGsMDyiY

News Verdict: The claim is false. The photograph is from the year 1995 when Urmila's film 'Rangeela' was released.