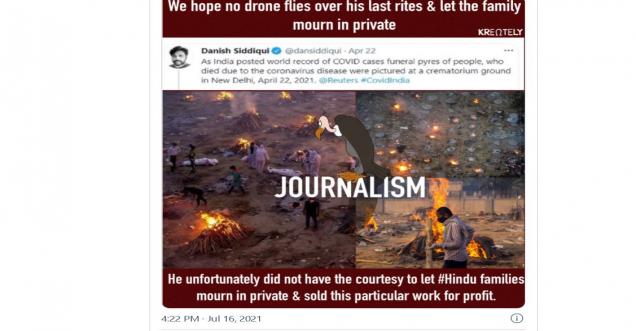 News Claim: Multiple pictures, after the death of photojournalist Danish Siddiqui is going viral on social media, which claim that Danish Siddiqui sold images of mass funerals of COVID-19 victims in India to a foreign media outlet for profit.

Viral News Today: Danish Siddiqui, who clicked these Funeral pics, sold them and made huge money got killed by the Taliban in Afghanistan

Danish Siddhiqui, who clicked these Funeral pics, sold them and made huge money got killed by Taliban in Afghanistan😂🙏 pic.twitter.com/mPajMAhlJN

The vulture of journalism

The vulture of journalism pic.twitter.com/O7s7MAN3iZ

News Verification: Danish Siddiqui, the 41 old photographer for Reuters was killed in Afghanistan on July 16 while covering the ongoing clash between Afghan forces and the Taliban near a key border crossing in Spin Boldak. It is still not clear regarding the reason for the death of Siddiqui.

Based out of Mumbai, Danish worked with Reuters for more than a decade.

Recently, his photos of mass funerals held at the peak of India's second wave went viral and won him global praise and recognition.

As a photojournalist, Danish has covered several important stories in Asia, Middle East and Europe. Some of his works include covering the wars in Afghanistan and Iraq, the Rohingya refugees crisis, Hong Kong protests, Nepal earthquakes, Mass Games in North Korea and living conditions of asylum seekers in Switzerland. He has also produced a photo series on Muslim converts in England.

Thread -
On BBC World, I narrate my experience of covering the second wave of the #COVID19 pandemic that has caught India unprepared. @Reuters @BBCWorld

The picture shared on social media are copyrighted to Reuters and Danish was employed to Reuters over a decade. There are no rights in the pictures to show that it has been sold to Getty or other image processing companies. If one searches the images on google, it comes up with a text message as, “Creator: DANISH SIDDIQUI Credit: REUTERS” 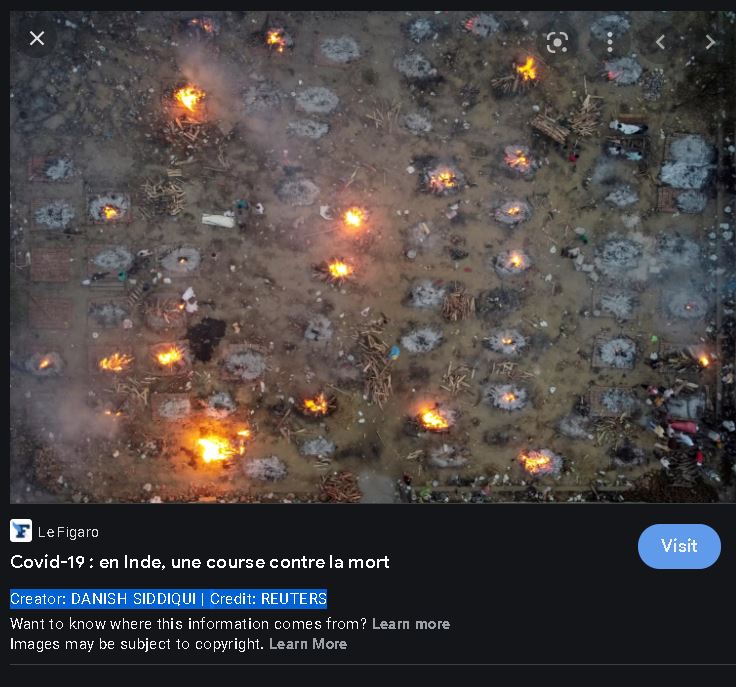 A note on his website states that “*IMPORTANT NOTICE* Photographs in this portfolio are shot by me, mostly during my time with Reuters. Copyright resides with the photographer and with Reuters. Photographs may not be reproduced in any form without prior written agreement. If you want to use any of them please contact me. You are deemed to have read this notice if browsing this website. Thanks.”
It is wrong to say that the photographer sold the Cremation Images for profit.