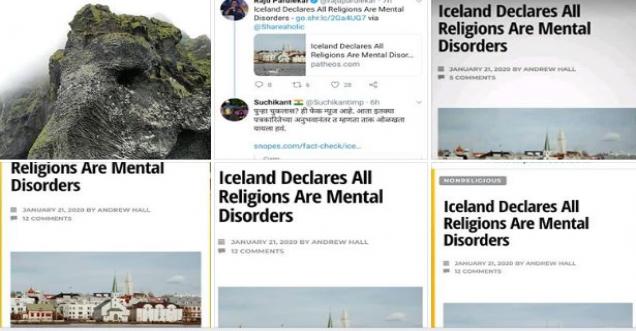 Fake news claim: News talked about in Social Media claiming, Iceland officially states religious faith is delusional and harmful.
Reykyavik, Iceland – This small island country in the North Atlantic is home to many controversies. The country’s parliament voted in 2017 to place mental health warnings on all Bibles. In that same year, the nation took another secular step forward by banning American televangelists. Iceland is starting in 2020 by declaring all religions to be psychological disorders.

The Alþingi (the nation’s parliament) voted overwhelmingly in favor of the statute 60-3. The three politicians who voted against the decree reportedly believed the measure didn’t go far enough. “We don’t want to end up like the United States or Saudi Arabia, do we?” one anonymous representative mused.

Atheists of the world give thanks #Atheism
Now @rcpsych @APAPsychiatric can we have an #ICD11 #DSMV1 coding please.