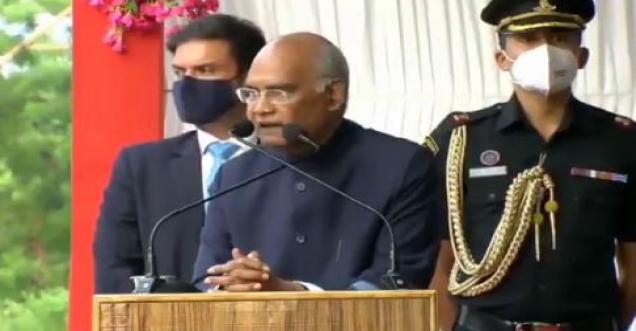 News claim:  President Ram Nath Kovind has said he pays tax amounting to Rs 2.75 lakh a month. Many users on social media claimed this information is not true.

Viral News Information: President Ram Nath #Kovind Tells How Much He Gets Paid Monthly and How Much Income #Tax Is Deducted 'I get #salary of 5 lakhs per month, out of which 2,75,000 goes to tax, a teacher has more savings than us', said President Ram Nath Kovind.

President Ram Nath #Kovind Tells How Much He Gets Paid Monthly and How Much Income #Tax Is Deducted
'I get #salary of 5 lakhs per month, out of which 2,75,000 goes to tax, a teacher has more savings than us', said President Ram Nath Kovind. pic.twitter.com/B2V7X2CLro

The First Citizen Of Country doesn't know his salary is tax free The President’s (Emoluments) and Pension Act, 1951 ? https://t.co/LLGNrnWBBu

President of India Mr. Ram Nath Kovind says, he pays ₹2.75 lacs as taxes every month. Being a president, I think he's unaware of his country's constituency. According to Presidents Pension Act 1951, Presidents salary(Emoluments) is Tax Free. #presidentofindia #RamnathKovind

News Verification & Origin: Does the president of India pay income tax, this is the big question and we have been studying this in our school syllabus as well. The answer is that the President of India is not exempted from Income tax.

President Ram Nath Kovind, on June 27, 2021, said his salary is Rs 5 lakh a month and of it, Rs 2.75 lakh go into taxes. He said, "I am mentioning this because everyone knows that there is nothing wrong. The President is the country's highest-paid employee but he also pays taxes. I pay Rs 2.75 lakh as tax each month. Everyone says I get Rs 5 lakh a month, but it is taxed too," Kovind said. "But how much is left? Whatever I save, our officials earn more than that. The teachers here earn more."

Many of the non-BJP supporters were quite enthusiastic to support the claim that the president of India enjoys a tax-free life.

As per THE PRESIDENT’S EMOLUMENTS AND PENSION ACT, 1951, the President of India earns ₹5 lakh a month. We did not find any reference that it is tax-free.

Recently, President Ram Nath Kovind has decided to forgo 30% of his salary for the whole year in the wake of the coronavirus (COVID-19) pandemic.

News Rating Shared on Social media: The president of India also pays taxes like any other citizen of India.