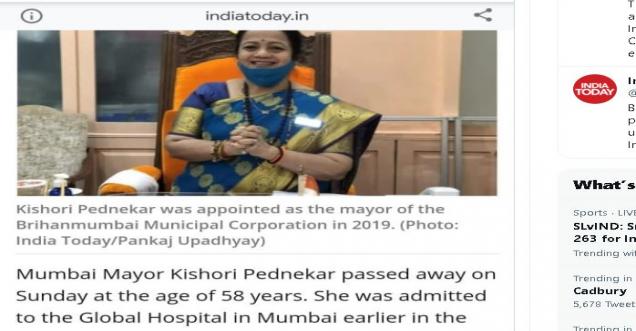 News Claim: Fake news went viral sometime in India today before it was actually corrected by India today, it declared; Mumbai Mayor Kishori Pednekar passes away at age of 79

News Verification: The above message was recently viral on social media; it was originally posted on July 18, 2021, of the passing away of Mumbai Mayor Kishori Pednekar.  However, it was later corrected. A google search revealed the same result.

Later it was corrected to, “Mumbai Mayor Kishori was admitted to the Global Hospital in Mumbai earlier on Sunday after she had complained about chest pain. Following her admission, the hospital authorities had said that she was suffering from epigastric pain.”