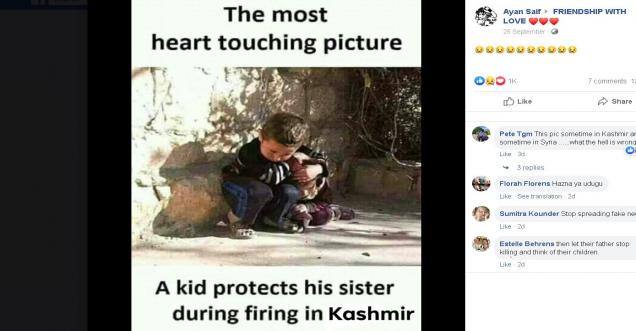 Fake news claim: An Image from Syria is shared on social media claiming it to be from Kashmir, of a kid protects his sister during firing in Kashmir.

The message reads as, “The most heart touching the picture, A kid protects his sister during firing in Kashmir”

Verification: This image shared on Facebook has been liked by over 1k people on social media; it is not from Kashmir, India.

The image was shared by dailyasianage on 21st June, 2016. The news content given on the website was, A heartbreaking photo of a Syrian child protecting his little sister has surfaced, reminding us once more of the innocence being destroyed in this civil war."A child trying to protect his younger sister from bombing in #Syria.#stop conflict & bloodshed #save humanity."”

The same image was shared on twitter earlier on 2015.

Hence the image is not recent and definitely not from Kashmir.