A message viral on social media claims that, Government may slash pension to employees to by 30% Mon, 06 April 2020 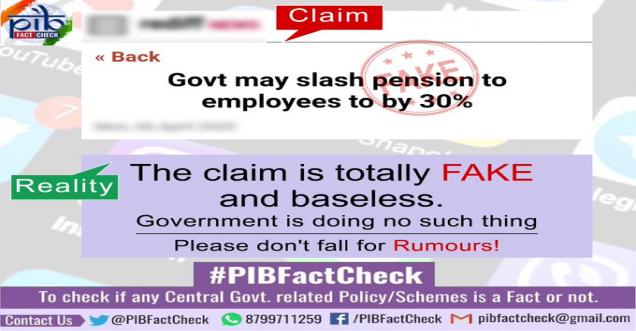 Multiple Fake news claims: A message viral on social media claims that, Government may slash pension to employees to by 30%
Mon, 06 April 2020

If this news is true, then it is draconian. There can beca sealing on pension amount so that the high pension drawers may get affected by reduction. No pensioner should be affected who is drawing less than 25k a month when he is single and 50k if he is with family. Most normal officers of government including defence are totally dependant on this pension on their monthly expences.

Govt may slash pension to employees by 30% - Rediff

Also talk of cutting off pensions for those over 80. Harsh but imo good. We need to spread it around. Our ‘middle class’ has cornered too much (in quotes bcos only 2 categories here: Poor and not poor) https://t.co/EfDUDKh1m3

News Verification: A news viral on social media claims that government may reduce slash pension to employees by 30%. Government based fact check Press Information Bureau stated that the information is not true.