Has India got the Presidency of the United Nations Security Council for the first time? 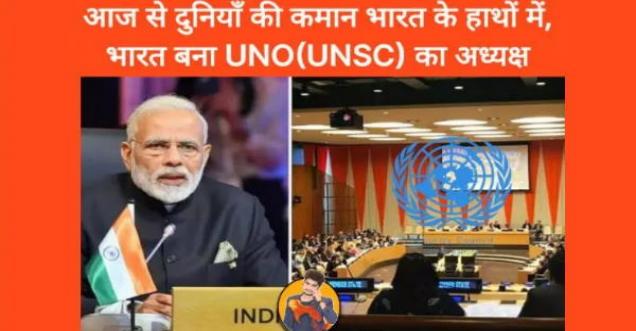 News Claim: In a viral message on social media, it is being claimed that India is chairing the Security Council of the United Nations (UN) for the first time. Social media users are giving credit for this achievement of India to Prime Minister Narendra Modi.

Viral message on WhatsApp today & other Social Media: The message being shared on social media is - India's command of the world is in the hands of India, India becomes the president of UNO (UNSC), many countries including Turkey, Pakistan are furious, India will preside over the United Nations for the first time.

News Verification: India has assumed the presidency of the United Nations Security Council from August 1. After India got the Presidency of the United Nations Security Council, many types of claims are being seen on social media. A message is going viral, in which it is said that India has got this opportunity for the first time because of Narendra Modi. This message is being shared a lot but there is no truth in it. India has not got the presidency for the first time.

It has been written from some pages on Facebook that now the command of the world is in the hands of India, India has become the President of UNSC. Many countries like Turkey, Pakistan have been shocked. India will preside over the UN for the first time. It has also been shared from many other pages.

As a founding member of the United Nations, India is fully committed to the Organization's principles and purposes. During its forthcoming term in the UNSC, India will discharge its obligations as a responsible member of the international community and a representative of the developing countries by remaining fully and actively engaged on all issues before the Council. India looks forward to working with fellow members of the UNSC and other Member States of the UN to these ends.