I don’t believe in taking right decisions. I take decisions and then make them right 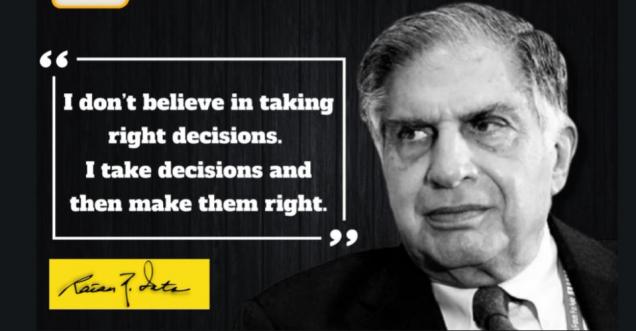 News Claim: A message widely viral on social media claiming Ratan Tata words as, “I don’t believe in taking right decisions. I take decisions and then make them right”.

Viral News Today:  Message viral on social media, “I don’t believe in taking right decisions. I take decisions and then make them right”

"I don't believe in taking right decisions, I take decisions and then make them right."#RatanTata#83rdBirthAnniversarry pic.twitter.com/p7mHDddH4A

News Verification:  The words were never said by Ratan Tata, this was also quoted and accepted by Ratan Tata himself. During one Interview, He said, “Facebook or Twitter made those statements it was never made by me”, were the words spoken.

If you hear the first 23 seconds of the below video, it is easy to deduce that Ratan Tata never made any such statements.

Ratan Naval Tata is an Indian industrialist, philanthropist, and former chairman of Tata Sons. He was also chairman of Tata Group, from 1990 to 2012, and again, as interim chairman, from October 2016 through February 2017, and continues to head its charitable trusts.

The origin of the actual person who said this words are not known, as it has been widely quoted by many over the years.