Is loose Canadian peanut butter sold at island of Trinidad? And other places 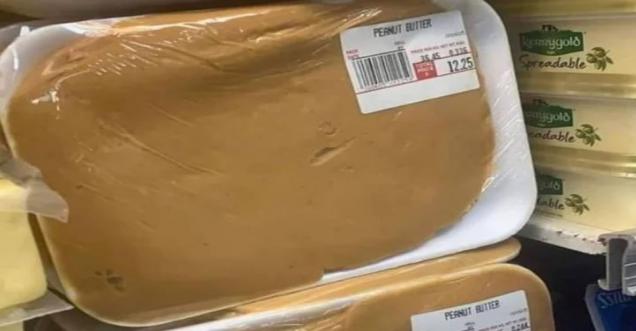 News Claim: An image of the Canadian peanut butter packaging on a tray is viral on social media.

Viral News Today: I just learned that Canadians actually buy their peanut butter like this and I’m so angry

the way they packaged this peanut butter

News Verification: The image of the packaging to the Canadian peanut butter was shared on various social media accounts. The image shared on social media is not true. Canadian butter is mostly sold in jars a quick search on Google reveals for the same.

However, based on the location and places things are sold in different mediums. A user posted on Twitter said, Ohio style peanut butter

Few user pointed out this as saying, It’s from an Amish shop apparently. But that still doesn’t explain it satisfactorily.

But... it's the internet. People say all kinds of crazy shit here.

But this was a good fella. Somebody I know since primary school. Short khaki pants and snatty nose days. And he was always a decent fella. Not really somebody to say outlandish things.

But this bredren come on Patrick Manning internet and say that a grocery in Arima was selling LOOSE PEANUTBUTTER.

I didn't believe him inno.

Weeks went by and I thought he was on shit and just being a clown.

Today he brought receipts and I hadda formally apologize”

The comment above suggests that though Canadian peanut butter is sold openly, however, it is not a standard practice.

As per news from loop news, As per Consumer Affairs Department, “Our Complaints and Investigation Officers have conducted several site inspections in relation to the attached photo and wishes to alert the public that this item is not being offered for sale at any of the establishments mentioned in several Facebook posts”

News verdict: False, This photo does not show a package of loose peanut butter in Canada.