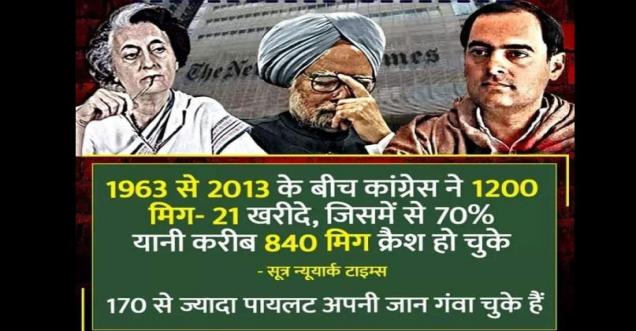 Facts Check Analysis The news claiming that 70% (approx 840) of the fighter jets bought under the Congress from 1963 to 2013 has been crashed, is true information shared on the social media.

India is the largest operator of MiG-21s. In 1961, the Indian Air Force (IAF) opted to purchase the MiG-21 over several other Western competitors. As part of the deal, the Soviet Union offered India full transfer of technology and rights for local assembly. In 1964, the MiG-21 became the first supersonic fighter jet to enter service with the IAF. Due to limited induction numbers and lack of pilot training, the IAF MiG-21 played a limited role in the Indo-Pakistani War of 1965.[10] However, the IAF gained valuable experience while operating the MiG-21 for defensive sorties during the war.[10] The positive feedback from IAF pilots during the 1965 war prompted India to place more orders for the fighter jet and also invest heavily in building the MiG-21's maintenance infrastructure and pilot training programs.

Since 1963, India has introduced more than 1,200 MiG fighters into its air force. As of 2019, 113 MiG-21s are known to be in operation in the IAF. However, the plane has been plagued by safety problems. Since 1970 more than 170 Indian pilots and 40 civilians have been killed in MiG-21 accidents. At least 14 MiG-21s have crashed between 2010 and 2013. Over half of the 840 aircraft built between 1966 and 1984 were lost to crashes. When in afterburner, the engine operates very close to its surge line and the ingestion of even a small bird can lead to an engine surge/seizure and flame out.

On 11 December 2013, India's second generation supersonic jet fighter, MiG-21FL was decommissioned after being in service for 50 years.

In view of the several incidents that have occurred after the 1999 Kargil War, the modernized MiG-21 Bison seems to have at present the role of an interceptor and possibly a limited role of a fighter aircraft.[

As per business-standard, From 1971 to April 2012, as many as 482 MiG aircraft accidents took place killing 171 pilots, 39 civilians, eight service personnel and one aircrew, the government told Parliament in May 2012. 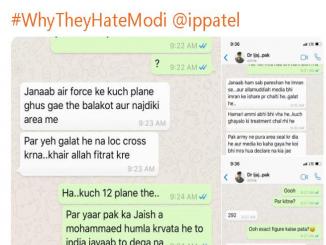