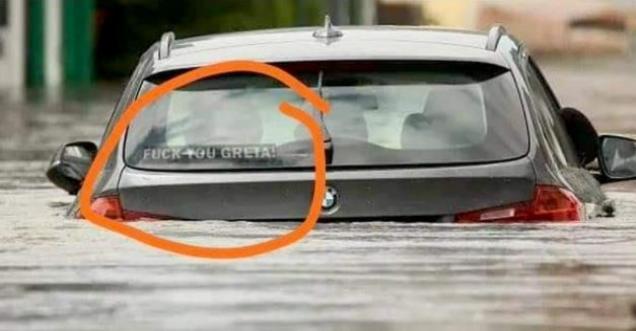 News Claim: A photo viral on social media claiming Greta Thunberg car sinking in a flood and Stickers on it as Fuck You Greta.

Viral News Today: An unknown car sinking in a flooded street had a text "Fuck You Greta" sticker on it.

News Verification: The above message was recently viral on social media; it was originally posted on July 16, 2021.

Apparently the bumper sticker is photoshopped in, which isn't surprising since this is in Germany, so presumably it would be in German (or Belgian, Dutch) if it were real.

I just saw it somewhere and copied it, not expecting it to blow up, lol. pic.twitter.com/FGXU56KurC

Greta Thunberg is a Swedish environmental activist who is internationally known for challenging world leaders to take immediate action for climate change mitigation.