UP Police Say 57 Cops Had Bullet Injuries In Clashes. We Found Only One 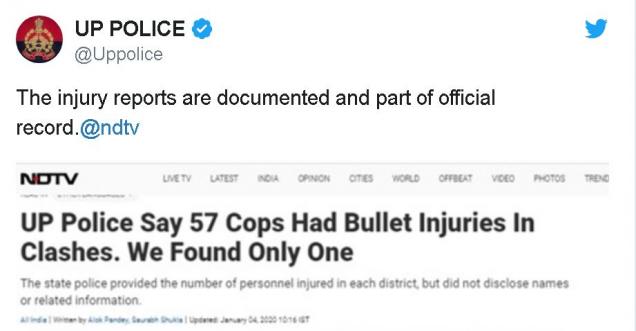 Fake news claim: UP Police Say 57 Cops Had Bullet Injuries In Clashes. We Found Only One.  The state police provided the number of personnel injured in each district, but did not disclose names or related information. All IndiaWritten by Alok Pandey, Saurabh ShuklaUpdated: January 04, 2020 16:23 IST by TaboolaSponsored LinksSponsored Eco-friendly homes at Rs 95L Near Manyata Tech Park (Assetz Property) Stanford Executive Education | Design Thinking (Great Learning) Uttar Pradesh police had earlier released a video of protesters shooting at them. Lucknow: As many as 21 people were killed in violent protests that broke out against the Citizenship Amendment Act in Uttar Pradesh last month. While many of them died of bullet injuries, the state police have owned up to firing in just one instance in the western district of Bijnor.

News Verification: The NDTV channel went into search mode trying to find the list of injured police men during the protest against the CAA, it was able to find only 1 police men injured in such a severe attack on the constitution of India, but the angry mod in UP.

In the second paragraph the NDTV goes ahread to say, “One of the few policemen NDTV managed to trace was Muzaffarnagar Superintendent of Police Satpal Antil, who still walks around with a bandaged foot. When approached, he showed a photograph of what appears to be a bullet wound. ", it is ridicules’ to say what appears, if a police men is showing his woulds, how can you still have doubts, but no doubts when a protestor shows his wounds.

The UP police took to Twitter to fact-check NDTV claims. It has cleared that the injury reports are documented and part of the official record.

The injury reports are documented and part of official record.@ndtv pic.twitter.com/mJyYFjwC3q

NDTV has cleverly tried to discredit the UP police fact check and the list of injuries as claimed by the police, by putting up its own fake news.

To make an instant donation to ayupp.com, click on the "Donate Now" button above.
Tags NDTV fake news