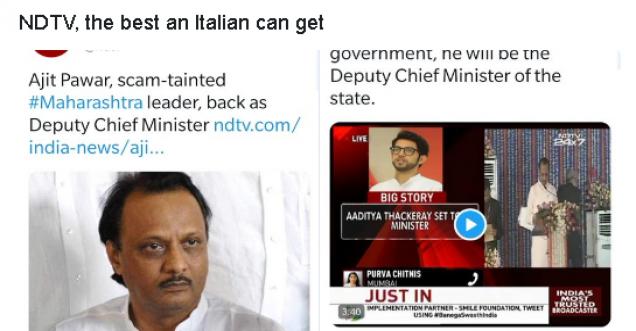 Fake news claim: NDTV Sonia Singh still claims that Ajit Pawar was first given a clean chit by the BJP’s Fadnavis 48 hour government. In a tweet she mentioned

Well,going by the facts, the Fadnavis 48 hour government first cleared Mr Pawar, followed by the current https://t.co/Dzih5m6Oml,perhaps Mr Roushan could direct his tweets to them & not NDTV. Facts First not your own biases,please https://t.co/glEWGMIesK 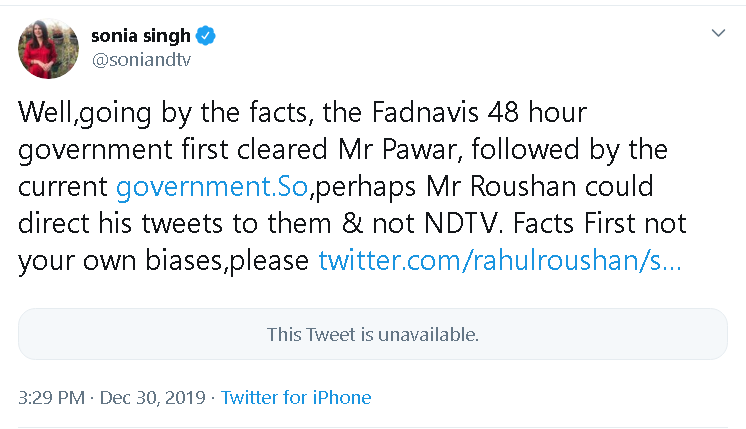 News Verification: The Fadnavis 48 hour government never gave a clean chit to the present deputy Minister in Maharastra. The Tweet was directed by OpIndia CEO Rahul Roushan, with two images of Pawar. One when he took oath as Deputy CM under the Fadnavis government. Then the NDTV reported as, “Ajit Pawar,scam-tainted #Maharastra leader, back as Deputy Chief Minister” and presently when the same Ajit Pawar took the oath, the NDTV reported as, “Watch | NCP’s Ajit Pawar takes oath as minister in #Maharastra government, he will be Deputy Chief Minister of the state”, clearly a huge difference and biased reporting by a national news media like NDTV.

NDTV, the best an Italian can get pic.twitter.com/ufHu3qJYhk

As reported by times of India, the Maha Vikas Aghadi government in Maharashtra has given a clean chit to Ajit Pawar in Vidarbha Irrigation Development Corporation scam cases and not the 48 hours  BJP government too had given him a clean chit in the irrigation scams.

The news published in the website on December 20, said, “The Anti-Corruption Bureau on Friday submitted one more affidavit in the Nagpur bench of the Bombay High court, giving a clean chit to NCP leader Ajit Pawar in connection with the alleged scam involving 12 projects under Vidarbha Irrigation Development Corporation (VIDC).”

On Nov 25, 2019, Maharashtra Anti Corruption Bureau (ACB) DG, Parambir Singh to ANI: None of the cases that were closed today are related to Maharashtra Deputy Chief Minister, Ajit Pawar.

Hence it is wrong to say that the BJP led government in Maharashtra gave a clean chit to Ajit Pawar.