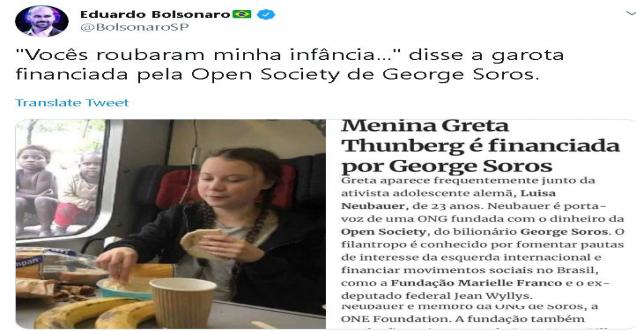 News Claim: Fake picture of Greta Thunberg Eating Lunch in front of small and poor kids has gone viral ever since the shared by Eduardo Bolsonaro, son of Brazil's controversial president Jair Bolsonaro.

Facts Check Analysis The fake pictures being shared by Eduardo Bolsonaro of Greta Thunberg is not true. The original picture was posted by Greta Thunberg few days back on social media account, which shows her eating lunch in a train with forest in the background.

Eduardo Nantes Bolsonaro is a Brazilian lawyer, federal police officer and politician. He is the third child of Jair Bolsonaro, the 38th President of Brazil. He has been a member of the Chamber of Deputies since 2015, and is affiliated to the Social Liberal Party