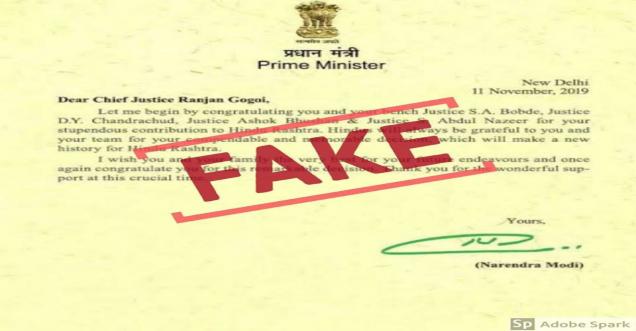 Fake news claim: A fake message said to be from the PM of India states a letter to Chief Justice Ranjan Gogoi, S.A Bobde, Justice D.Y Chandrachud congratulating them towards Hindu Rastra.

Let me begin by congratulating you and your bench S.A Bobde, Justice D.Y Chandrachud, Justice Ashok Bhushan & Justice S. Abdul Nazeer for your stupendous contribution to Hindu Rashtra. Hindus will always be grateful to you and your team for your commendable and memorable decision, which will make a new history for Hindu Rashtra.

I wish you and your family the very best for your future endeavors and once again congratulate you for this remarkable decision. Thank you for the wonderful support at this crucial time.

PM India Narendra Modi writes a congratulatory letter to the Chief Justice & his bench for upholding & contributing the Hindu Rashtra.
One of its kind !!

PM India Narendra Modi writes a congratulatory letter to the Chief Justice & his bench for upholding & contributing the Hindu Rashtra.
One of its kind !! pic.twitter.com/2eYNIXofYk

News Verification: The letter attributing to Justice Ranjan Gogoi by Narendra Modi congratulating him for the recent clearance for the construction of the Ram temple.

Ranjan Gogoi and five-member judges resolved cleared the construction of the Ram temple on the disputed 2.77 acres of land by ruling in favor of Ramlala Virajman in the Ram Janmabhoomi-Babri Masjid dispute case. The judges also ordered to provide five acres of land to Sunni Waqf Board in Ayodhya.

We did not find any tweet or message from the PM Narendra Modi supporting this claim.

Indian High Commission in Dhaka cautions people about a fake letter being circulated in some news media in #Bangladesh.

The fake letter claims that PM Narendra Modi has written a letter to Chief Justice of India congratulating him on #AyodhyaVerdict. pic.twitter.com/nJQrhT9kfo

PIB also reported for the same news, claiming it to be fake

A purported letter from PM @narendramodi to Chief Justice of India on the Ayodhya judgment is circulating on social media.#PIBFactCheck : no such letter has been written.

The letter is fake and malicious. pic.twitter.com/i00nOalBTp