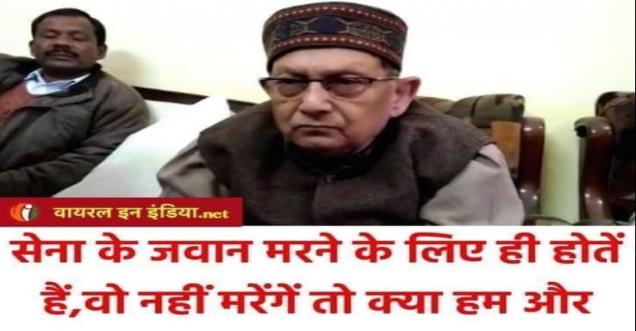 Viral Claim: In the wake of the deadly Pulwama attack in Jammu and Kashmir, old news of a BJP leader has gone viral, jawans are bound to get killed. They are paid for doing so.

Facts Check: Context is not correct

‘Soldiers die, such things happen,’ says BJP MP Nepal Singh. Such insensitivity, while the Country mourns deaths of our Jawans

The Mumbai Congress tweeted this as if this statement was given by Nepal Singh after the recent Pulwama attack.

The statement was given by Nepal Singh, BJP MP from Rampur, it was made last year i.e. in January 2018.

“Soldiers in the army die every day. There is no country in this world where in a battle, soldiers do not lose their lives. These things happen,” said Singh when he was asked about the Pulwama, J&K terror attack of Sunday.

Later, when asked about his allegedly insensitive comments, Singh said he didn’t mean to insult the Army.