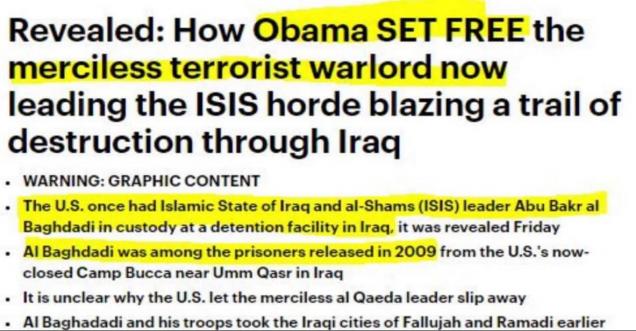 Once again Trump undoes an Obama mistake. "Al-Baghdadi was the leader of the ISIS Caliphate. He was held by the US in 2009 until the Iraqis and the Obama administration agreed to let him go" Wonder the REAL reason he was let loose?

Facts Check Analysis: Islamic State leader Abu Bakr al-Baghdadi is dead now. He killed himself during attack by US forces at a compound in Syria. Soon after the death memes have flooded the internet that the ISIS leader was freed earlier in 2009 by former President of America, President Barack Obama.

Al-Baghdadi was arrested by US Forces-Iraq on 2 or 4 February 2004 near Fallujah while visiting the home of his old student friend, Nessayif Numan Nessayif, also on the American wanted list at the time and studied together with al-Baghdadi at the Islamic University. He was detained at the Abu Ghraib and Camp Bucca detention centers under his name Ibrahim Awad Ibrahim al-Badry as a "civilian internee." His detainee card gives his profession as "administrative work (secretary)." The US Department of Defense said al-Baghdadi was imprisoned at Compound 6, which was a medium security Sunni compound. On 8 December 2004, he was released as a prisoner deemed "low level" after being recommended for release by the Combined Review and Release Board.

A number of newspapers and news channels have instead stated that al-Baghdadi was interned from 2005 to 2009. These reports originate from an interview with the former commander of Camp Bucca, Colonel Kenneth King, and are not substantiated by Department of Defense records. Al-Baghdadi was imprisoned at Camp Bucca along with other future leaders of ISIL.

James Woods, has millions of followers on twitter, back in 2014 tweeted a doubtful tweet on the ISIS leader. Many has questioned about the truth about the tweet.

And, of course, the leader of ISIS was imprisoned by American troops and ordered released to Iraq by Obama administration in 2009.

Baghdadi was held by U.S. forces at a detention facility in Iraq called Camp Bucca. As per the Defense Department, Baghdadi was released in 2004, not 2009.