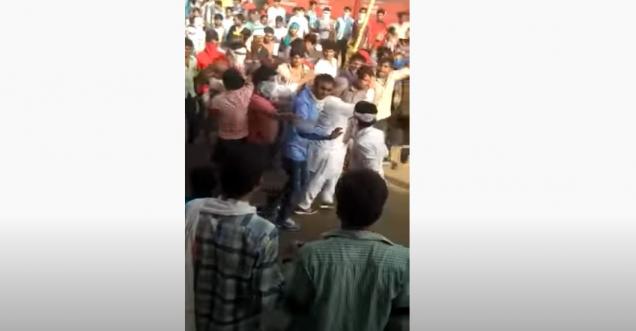 News Claim: A video is becoming viral in which it can be seen that an angry mob on the road is attacking a person with sticks while making him run. It is being claimed with this video that Congress MLA Ramkesh Meena, who was insulting and taking down the saffron flag in Rajasthan, was beaten up by Hindus.

Congress MLA Ramkesh Meena who tore the flag written by saffron Jai Shri Ram in Jaipur was beaten by the public.

Ramkesh Meena MLA who hoisted the holy flag of Hindu religion #saffron _ flag in Rajasthan was beaten by Hindus.

Congress MLA Ramkesh Meena who hoisted the saffron flag in Rajasthan was beaten by Hindus..

Hindus wake up, country ahead, all the enemies of the country run away

News Verification: In fact, on July 21, in the presence of a Congress-backed Independent MLA named Ramkesh Meena, the saffron flag installed at Amagarh Fort in Jaipur was demolished. During this the flag was torn. Whose video is becoming very viral on social media? Hinduist organizations expressed their displeasure over the incident and demanded the arrest of Ramkesh Meena. Now keeping this in mind, this video is going viral and it is being said that Ramkesh Meena was beaten up by the public for desecrating the saffron flag.

Ayupp news has found that the claim is made with the video is not entirely true. The person who is seen attacking the mob in the video is Ramkesh Meena, but the video is from April 2018 when Meena was thrashed by miscreants during a protest against the changes in the SC-ST Act in Rajasthan.

Below video from 2018, states that how Ramkesh Meena was beaten up

So it is true that Ramkesh Meena was beaten up by the mob, however, the video is old and viral since 2018.