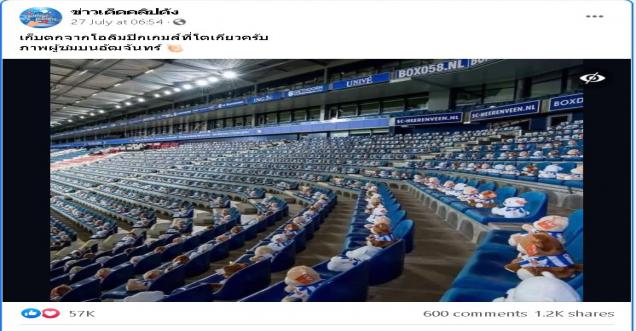 News Claim: A picture liked by more than 56000 people on social media claiming a stadium picture with seats filled with Teddy Bear at Tokyo Olympics 2021, is viral on social media.

Viral message on WhatsApp today & other Social Media: Tweets shared by many on social media as, เก็บตกจากโอลิมปิกเกมส์ที่โตเกียวครับ ภาพผู้ชมบนอัฒจันทร์

Collected from the Olympic Games in Tokyo. View of the audience on the stands

News Verification: The information shared in social media is not true. The picture shared are not from Tokyo Olympics.

We dound the image on Getty Images, uploaded on 2020. The message on getty states that, “Dutch Eredivisie"sc Heerenveen v FC Emmen"

HEERENVEEN - No supporters because of the tightened corona measures, but 15 thousand teddy bears with a football shirt in the stands before the start of the Dutch Eredivisie match between sc Heerenveen and FC Emmen in the Abe Lenstra Stadium on October 24, 2020 in Heerenveen, the Netherlands. ANP COR LASKER (Photo by ANP Sport via Getty Images)”

The same image uploaded on Republic World, as of news published on 27th October 2020, it states, “Eredivisie outfit SC Heerenveen took the world by surprise in the game against FC Emmen not only by their spectacular performance but for another splendid reason that has left the club fans awestruck. With no fans in the stadium, the club decided to place Heerenveen teddy bears in solidarity with the children diagnosed with cancer in the Netherlands. ”