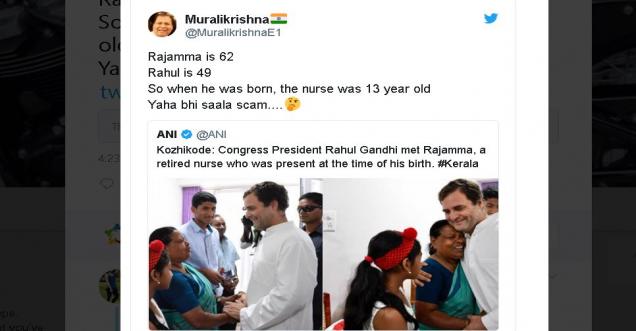 Viral Claim: The viral message claims the age of the Nurse who was present during Congress President Rahul Gandhi’s birth was only 13 years old is not true.

Rajamma is 62 Rahul is 49 So when he was born, the nurse was 13 year old Yaha bhi saala scam

Facts Check News: A good deal of news media have claimed that Rajamma Vavathil, who has held Rahul Gandhi 49 years years ago. The nurse claimed that she held in her hands as a newborn at a Delhi hospital.

As per many news reports On June 19, 1970 Vavathil was on duty at Delhi’s Holy Family Hospital, when Rahul was born.

Clearly, the fake information shared by over 13 thousand on social media is not true. The current age of the Nurse who carried Rahul Gandhi is 72 and not 62 as claimed.