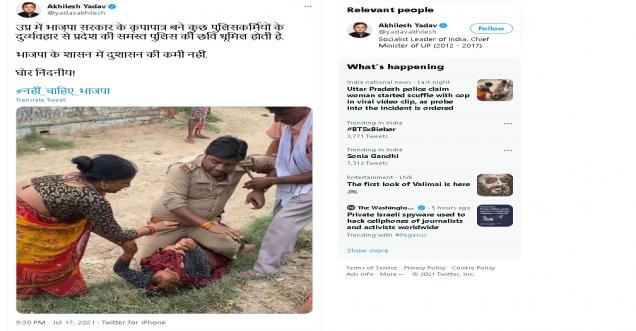 News Claim: A tweet by UP ex-CM Akhilesh Yadav has caused a huge outrage on Social media, Photographs of the cop sitting on top of the woman and hitting her, have gone viral on social media.

Due to the misbehaviour of some policemen who became benevolent of the BJP government in UP, the image of the entire police in the state is tarnished. There is no dearth of Dushasan in the BJP rule. Disgusting!

News Verification: The above message that was recently viral on social media is not true. There are multiple videos floating with different narratives. In one of the videos, the women can be seen running towards the police.

The incident happened on Saturday 17th July, where it is alleged that police overpowered a woman, pulled her to the ground and hit her as he sat on top of her in Kanpur Dehat district, however it is not true as per police the woman has actually pulled the cop down to the ground.

As per the Kanpur Police, the team was attacked by the women of the family of Shivam Yadav, who according to the police, had threatened a candidate in the panchayat elections.

As per to reports, sub-inspector Mahendra Patel had an altercation with the woman in Durgadaspur village while he was looking for Yadav.

Kanpur Dehat superintendent of police (SP) Keshav Chaudhary said the videos show that Patel, who is in charge of the Bhognipur police post, fell on the woman and the family members attacked the police and managed to let Shivam Yadav run away from custody. The SP also said that images of the incident showed the woman caught hold of the SI's collar after which he fell on her.

According to Yadav’s family, the police officer acted in an unruly manner because they refused to obey the ‘demands’ made by Patel.

Samajwadi Party (SP) chief Akhilesh Yadav tweeted a photograph of the incident and demanded action against the officer involved.

SI Mahendra Patel was taken off active duty on Saturday night to ensure a free and fair probe, officials said.

News verdict: The police fell on the women during the incident