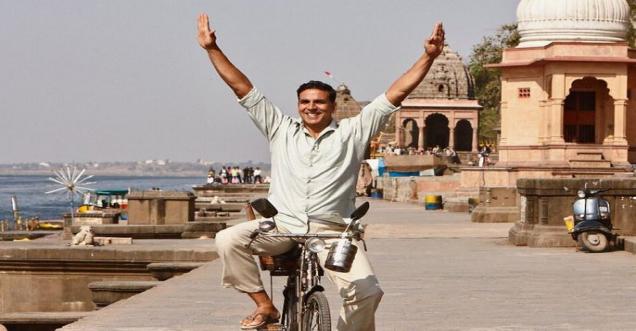 Mumbai: Akshay Kumar's upcoming film Padman has been released on the social media. The first poster was released by Twinkle Khanna. Recently all the upcoming movies of Akshay are giving some Social messages to the people. The film Toilet Ek Prem Katha is about toilet in India, all set to release which will give the message to the people about cleanliness and toilets.

In the first look of Padman, Akshay Kumar is seen in a very happy mood. He has a lunch box on his bicycles. The movie Padman is being produced by Twinkle Khanna and its director R. Are Balki.

The release date of the Padman film has been out through the first poster. The film will be released on April 13, 2018. Sonam Kapoor and Radhika Apte are in the main character in the movie. Right now, Big B is also going to be seen in this movie. He will play cameo role in this movie.

Akshay Kumar will be seen making sanitary pads in the movie Padman. This movie is based on Arunachalam Muruganantham of Coimbatore in Real Life. They had made the cheapest sanitary pads while facing all the difficulties. This Topic, For the first Time will be shown in a Bollywood film.

The movie is based on Arunachalam Muruganantham, who is also a social entrepreneur from Coimbatore in Tamil Nadu, India. He is the inventor of a low-cost sanitary pad making machine and has innovated grass-roots mechanisms for generating awareness about traditional unhygienic practices around menstruation in rural India. His mini-machines, which can manufacture sanitary pads for less than a third of the cost of commercial pads, have been installed in 23 of the 29 states of India. He is currently planning to expand the production of these machines to 106 nations.