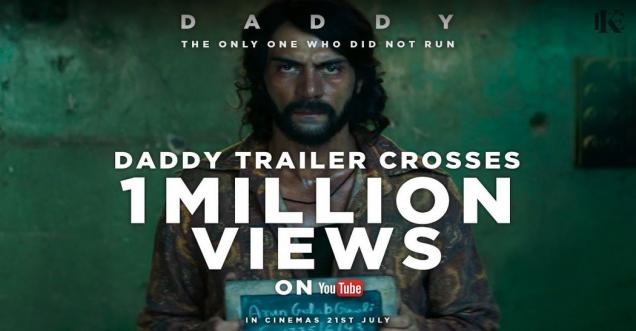 New Delhi: The movie poster was released some time ago. Daddy film is directed by Ashim Ahluwalia, Arjun Rampal is playing the role of gangster Arun Gawli. Arjun Rampal looks exactly like gawli. If you are a little confused about the title of the movie, let us then tell that Arun Gawli was a well known  person ad he was lovingly called as daddy. So the name of the movie is Daddy. Arjun has shared the first look of this movie on his Twitter account.

Watch the trailer of Arjun Rampal movie Daddy below.

The trailer is energetic and soon after you start watching the trailer of Daddy the first thing which mightcome to your mind is that, will Daddy can be compared to the 1998’hit Satya movie. Currenly it looks like so.

The film's teaser was first released. Some texts appear on the black screen in the teaser and a voice over is running from the rear. This is actually an answer to Gawli's interview. At the same time thriller music continues to run in the background, which also creates curiosity along with fear. In addition to Daddy, Arjun Rampal is presently in the promotion of his film Kahaani 2. A few days ago, he had reached Kapil Sharma's show for the promotion of his film.