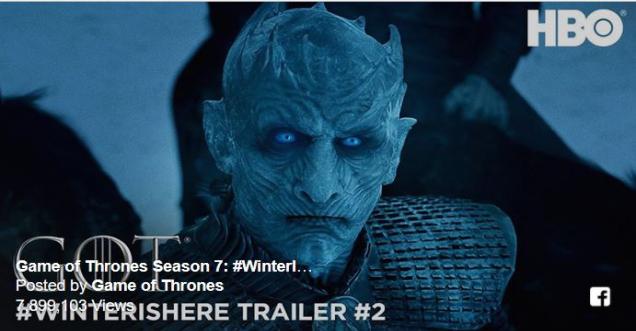 The second trailer for the upcoming Game of thrones session 7, trailer 2 is out on the official facebook page of the GOT. The trailer was released today on the facebook account from the makers of the game of thrones.

The two minutes long trailer starts with Sansa Stark walking by the godswood at winter fell. There is a background music of piano and message being said “Don't fight in the north; or the south. Fight every battle everywhere. Always...in your mind.”

The official trailer was launched recently

Cersei, can be seen preparing for the battles as well.

The white-walkers have grown stronger and are approaching the south.

The whole trailer seems to point out that all the houses - Stark, Lannister, Targaryen and Greyjoys – all of them are ready for the ultimate war.

At the end, we hear Sansa's voice,"When the snows fall and the white winds blow, the lone wolf dies but the pack survives."