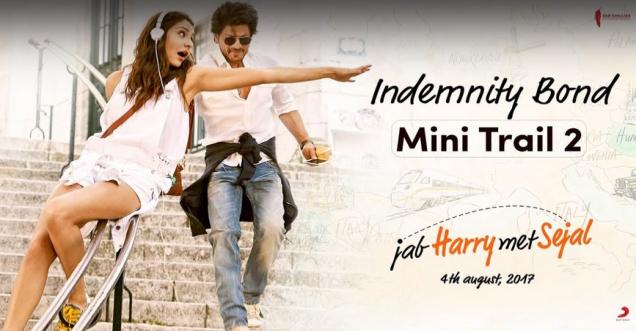 The Second mini trailer of Jab Harry Met Sejal has been released on 19th june again after the first mini trailer on 18th June.. The makers of the movie have decided not to release the entire trailer at the same time but simultaneously in part wise, in pieces. So that the curiosity of the people remained on the movie. In today's trailer released Anushka is signing an indemnity bond with Shahrukh Khan. According to which if there is any kind of physical relationship between them, Harry should not give any damage amount to him. The actor become happy after seeing that and say it became very good.

After this the actress says that she has done LLB and she handles the legal matters of the family. Apart from this, a glimpse of the romance between the two is also seen in the trailer. Shahrukh Khan has shared this trailer with his official Twitter account. They gave it captions - I do not need to fear now. This is indemnity bond, right? If we talk about the teller released yesterday, then Anushka's roll showed innocence. For this reason, she does not understand what the actors want to say. Instead of asking the question, what does the boy do with the girl? Which Shahrukh cannot answer and sit down holding his hand. One thing is that when you see this mini trailer you will love Harry's character.

Harry's character is quite lively, friendly and macho. Shahrukh Khan has released this first mini trailer from its Twitter handle. The title is given - Character bad. In the caption, Shahrukh wrote - Sejal, I had already told that I am a little bit cheap. And tell you something else tomorrow.

Highlight of this trailer is Anushka's Gujarati accent. He is very much interested in Gujarati avatars. The fidelity of the actress will remind you of the pair made by his debut movie Rab ne bana di jodi. Let me tell you that before the announcement of Imtiaz Ali's upcoming movie "jab Harry Mate Sejal", there was a lot of gambling about its name.