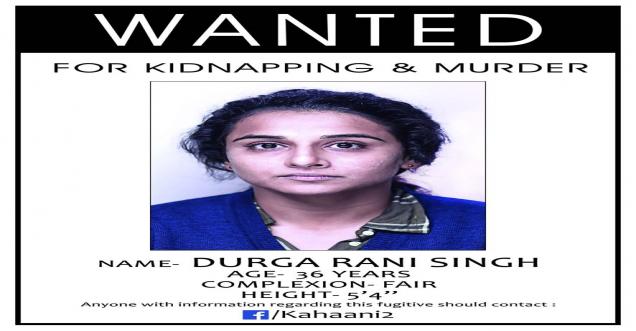 Mumbai, Bollywood-Hollywood: Every weekend comes and we start waiting for the movies we can opt for that week. Here is a quick update on the list of movies which we think you can surely watch. The major movies releasing this week are Kahaani 2, Underworld: Blood Wars (English) and Aasra.

Kahaani 2, is the sequel to the first Kahaani, which was a great hit, looks like it do not have much competition other movies other then Underworld: Blood Wars which itself is also from the famous hit franchise underworld.

Story in short: Durga Rani Singh is Wanted for murder & kidnapping. Vidya Sinha (Vidya Balan) and her daughter Mini live peacefully in the sleepy town of Chandan Nagore. Vidya's life revolves around Mini. Her greatest joys are the little things she does with her daughter like playing little games, going for walks, cleaning the house together etc. However, life has other plans; as Mini is kidnapped and while trying to locate her daughter, Vidya meets with a terrible accident landing her in a state of coma at the hospital. When Inspector Inderjeet Singh (Arjun Rampal) arrives at the hospital in a response to the hit and run case, little does he expect the turn of events. As he investigates, he discovers that Vidya Sinha may not be all she appears. There is a dark past, which is linking her to Durga Rani Singh- a 36-year-old WANTED criminal on the run for Kidnapping and Murder. What follows is an edge of the seat suspense drama where Vidya who lies in a state of coma is running against time to save her daughter and Inderjeet tries to solve the case of Vidya Sinha's mysterious past.

Vampire death dealer Selene (Kate Beckinsale) must fend off brutal attacks from both the Lycan clan and the Vampire faction that betrayed her. With her only allies, David (Theo James) and his father Thomas (Charles Dance), she must stop the eternal war between Lycans and Vampires, even if it means she has to make the ultimate sacrifice.