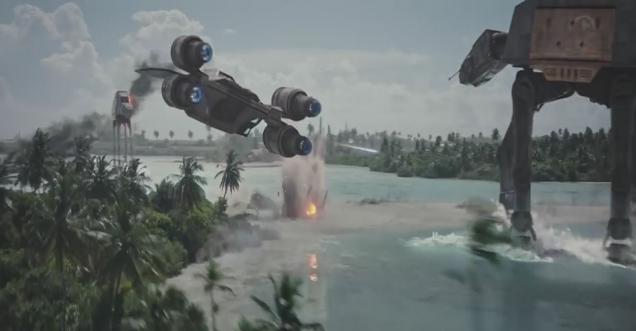 The final Rogue One trailer is now in range. You may watch it when ready.

From Lucasfilm comes the first of the Star Wars standalone films, "Rogue One: A Star Wars Story," an all-new epic adventure. In a time of conflict, a group of unlikely heroes band together on a mission to steal the plans to the Death Star, the Empire's ultimate weapon of destruction. This key event in the Star Wars timeline brings together ordinary people who choose to do extraordinary things, and in doing so, become part of something greater than themselves.

If there is anything new in Rogue One, it is that there is much more of an emphasis on the Death Star’s nuclear effect. In other films, we’ve seen this weapon blow up planets, and the calamity was almost abstract; now a prototype is blowing up cities. The implied comparison arguably makes light of a serious subject, but there is a beady-eyed fervency with which Rogue One deploys this catastrophe, and portrays the sacrifice needed to prevent it. Its variations on a theme are muscular and adroit. This is another really entertaining fantasy with fan-fiction energy and attack.

The movie really go rogue at any stage, and it isn’t a pop culture event like The Force Awakens, in whose slipstream this appears; part of its charm resides in the eerie, almost dreamlike effect of continually producing familiar elements, reshuffled and reconfigured, a reaching back to the past and hinting at a preordained future. There are some truly spectacular cameos from much-loved personae, involving next-level digital effects — almost creepily exact, so that watching feels at various stages like going into a time machine, back to the 80s and 70s.

Rogue One draws deep on Star Wars mythology while breaking new narrative and aesthetic ground -- and suggesting a bright blockbuster future for the franchise.