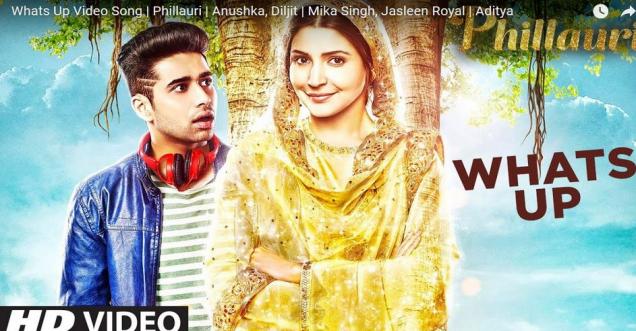 Movie, Phillauri: After a soulful First song Dum Dum, the makers of Phillauri have released the second wedding track from the movie. The song is What's Up, the song is peppy and groovy and meant foe weeding. The song is between two times one which is happening now and one which happened in the past.

The song features Anushka Sharma, Sooraj Sharma and Diljit Dosanjh with lots of baratis. Mika singh once agan showcase his talent with the song What's Up. The song is in Punjabi and has been written by Aditya Sharma.

The story is of Shashi (Anushka Sharma) a ghost who is in search of her lover (Diljit Dosanjh). Phillauri, directed by Anshai Lal, is releasing on March 24.

The trailer of Phillauri, as vibrant as Anushka, the movie is releasing on 24th March 2017. Shashi, the friendly spirit who is here to tell her love story. It narrates the unique story of how it will take a crazy Punjabi wedding, rank strangers and more than a lifetime to complete a love story.

The Movie is set in Phillaur, Punjab, it is an out and out full family entertainer.

Wow something new in Bollywood after a real long time.. Looking forward to watching this movie.

Terrific combination #AnushkaSharma & DiljitDosanjh!! I bet you, the movie is gonna be blockbuster of the Punjab film industry✌....& this is first I would like to watch!