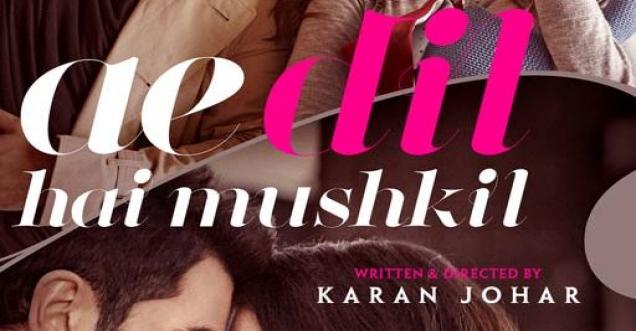 Thanks to the Shiv Sena and other people who have given indirect buzz to the movie Ae Dil Hai Mushkil, otherwise it would have been one of the most boring movie to watch.

Ae Dil Hai Mushkil traces the life of Ayan Sayengar (Ranbir Kapoor) who is “private-jet-type” rich and is living a life dictated by others’ wishes — pursuing an MBA as a singer cannot keep his dad’s business floating and being in ‘love’ because that’s what his mercenary girlfriend Lisa (Lisa Hayden) wants him to believe. Then arrives Alizeh (Anushka Sharma), a very sorted and mature woman who knows exactly what is wrong with her life, knows how to handle her weakness and how to enjoy life. She is also the one who makes Ayan become the real person that he is, one who enjoys cheap Bollywood songs, loves to sing and dances like no one is watching. We bet you haven’t seen Ranbir in anything like this before, not Rockstar and certainly not Tamasha.

This is a modern-day story set in London and Paris, the eternal lovers will find several other lovers before they get back. Except, instead of touching your heart with such pure humane emotions —irrational yet real, the film appears rather superficial. There are also sequences in the movie that reminds you of Kabhi Alvida Naa Kehna and Kal Ho Na Ho.

There is this intense passion/love Alizeh nurtures for her ex-boyfriend Ali (Fawad Khan), but we do not get to see her story. Saba (Aishwarya Rai Bachchan) is a divorcee poetess who meets a heart-broken Ayaan and falls in love. Shah Rukh Khan makes a small guest appearance and imparts some gyan to our hero.

Anushka, on the other hand is impressive with her new avatar as the woman who knows exactly what she wants from each of her relationships. Fawad Khan and SRK have very little screenspace to even comment on their performances, but you get to enjoy that sexy smile and the star persona respectively in the small bits they have. Aishwarya as Saba is what you imagine Aishwarya to be — sexy, smart, independent and someone with a great sense of self-importance.

And now for those still looking for controversies: Fawad’s is an extremely small role and none of the characters claim to be Pakistani citizens, unlike earlier reports.

Ae Dil Hai Mushkil offers little in terms of story and fails to get the audience empathise or feel for the characters and events in the movie. What it does offer is brilliance in the name of Ranbir and Anushka, some awe-inspiring shots of Aishwarya and Fawad and a very beautiful canvas as it is shot at exotic locales of London and Paris.

Once again we can thank supporter on the India against Pakistan that will make this movie HIT.